The Path Of Least Resistance. Freeloader 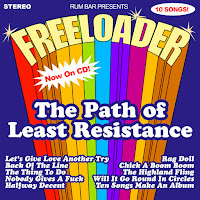 The older reader will be reminded immediately of the K-Tel and Arcade Best Of and compilation albums from the 70s looking at the, hideous, artwork on the left here. Don't be fooled though. On offer is a great, dirty rock and roll album of a band around Nat Freedberg, who already featured on this blog with his first solo album in the winter of this year. Freedberg is a busy person as he also releases an album with the band Freeloader.

The reason for this high turnout is simple. Songs just pour out of him. The ones that did not really fit his solo album 'Better Late Than Never' were put aside, adding two covers and the aptly called and late penned last song 'Ten Songs Make An Album' to make up The Path Of Least Resistance. A band was assembled and it was only a matter of time for another bunch of recorded Nat Freedberg songs was a fact.

In the bio it says that the songs put aside are more rock oriented and I can only shout: YES, THEY ARE, as loud as I can, in order to be heard. The Path Of Least Resistance is far more direct than Freedberg's recent, oh so nice, solo album. You can hear it in the lead guitar playing by Charles Hansen, the fiery responses of Freedberg's rhythm and the ever pounding on of the bass (Jim Haggerty) and drums (Jim Janota). The four Boston scene veterans do not hold back for a second and show their love for Aerosmith induced rock and roll with a garage rock edge making the songs just this little more dangerous, thus nicer. Freedberg knows how to write a garage rock song and the band how to make it come alive.

There's something about the voice of Nat Freedberg. If there is a male equivalent to the witch's voice in the Grimms' Hansel and Gretel fairytale it is Freedberg's. I can imagine hearing him say "Nibble, nibble, like a mouse, who is nibbling at my house"? and scare the two children half to death. There's this gnaw to his singing, but it fits his rock perfectly. Even in 'Rag Doll', the Four Seasons song, he makes me forget the voice of Frankie Valli instantly. Who cares for that high and neat but slightly wining voice, when you have Nat Freedberg and a bunch of guitars to boot?

Freeloader offer ten excellent songs that will rock you all night long. From begin to end The Path Of Least Resistance offers quality. (Okay, if I have to add something less positive, I could have done without the tongue-in-cheek Scottish accent in 'The highland Fling'. Twist my arm, I dare you.) And to think that that final song was added the day before the recording session and is one of the better songs on the album. It is far beyond me why so little people in my home country have heard of Nat Freedberg and now most likely of Freeloader. This is an album truly deserving to be heard by all (garage) rock fans.