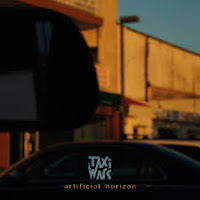 Comfort zone, the words have recently been used on the blog (see Billie Eilish). Artificial Horizon smells like artificial intelligence and is a subject that ought to get everyone out of his' and her's comfort zone, but surveillance and big data is an entirely different topic; not for this blog. No, I'm writing about TaxiWars, the collaboration between dEUS' Tom Barman and saxophone player Simon Verheyen.

The (late-night) jazzy music is not my immediate choice of music on an average day and non-average coming to that. However, Artificial Horizon opens with 'Drop Shot'. The piano reminds me of my favourite Clinic songs, the free-flowing melody brings the best of Blur to mind and the saxophone 'Waiting On A Friend', one the Stones' best ballads, so I don't think I need to explain further what makes 'Drop Shot' such a nice and intriguing song. One song into Artificial Horizon the album has brought me in a favourably inclined mood.

From there on TaxiWars plays with rhythms, bringing hip hop beats in and girl choirs into the mix. The clear, dry snaredrum sound propels 'Sharp Practice' forward. Tom Barman is able to do whatever he feels like, including musical stuff that has no place in his main vehicle, dEUS. This freedom and expectations that do not need to be met, leads him to even sing in a different way. The three men he collaborates with here, next to Verheyen, Nicolas Thijs on bass and Antoine Pierre on drums, all moved to New York City over the past decades to play jazz music in the U.S. That makes TaxiWars a NYC band. Jazz is not the only influence that comes across. The rhythms are often of a tightness that brings to mind Bowie's 'Blackstar', yes, also jazz, and hip hop/breakdance beats.

Just when I think to have heard the album, TaxiWars takes a sharp turn and presents a soft piano/saxophone driven ballad. 'Irritated Love' is a song that all but irritates. The song reminds me most of a Dylan ballad from his 'Mercy' album. Somehow too simple and yet it has that little, indefinable something that makes me want to listen.

It is the drumming that my attention goes to in 'Infinity Cove'. Antoine Pierre drives this song with his rhythms. Over it the ghost of Frank Zappa hovers ever so fleetingly. In the little twists in the melody and the way of singing. 'Different Or Not' holds a hint of Indian Askin, but would be one of that band's better songs easily.

'Safety In Numbers' offers alternative pop. Very alternative, true, but the vocal melody gives it away nonetheless. It is all these twists that make Artificial Horizon such an intriguing album. Even after listening to the album several times, it still is able to surprise me. Despite that the album does not sound "new" to me, for that there are too many easy to discern influences, the interaction between the musicians is fresh, clear and obvious. Together with the quality of the songs Artificial Horizon draws me out my comfort zone easily. An album that works in many different circumstances with ease.

You can listen to and buy Artificial Horizon here: