Hey Are You OK. Marike Jager 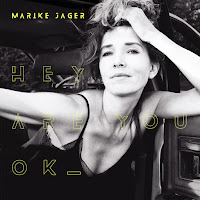 Marike Jager is an artist that faintly rings a bell, but is also associated by me with a 'should I listen to this'? message in my mind. So when I received the music to her new album, it was not on the top of my to do list, not even in the middle. So when my iPod accidentally switched in shuffle mode, I always let myself be surprised for a short while on those occasions, a song came by that I did not know but instantly liked. Time to look at what it was, 'Another River' by Marike Jager. The record was played as a whole next and here we are.

'Another River' is an alternative rock-pop song with an urgent drive, yet one that sets itself apart by the way the music defines the song or rather the emptiness of the whole. The basis is a fast, dry way of guitar playing providing the urgency. Other instruments move in and out of the song. Marike Jager sings over the whole in a fairly relaxed way. Denying the urgency to touch her delivery of the lyrics.

In the music the album holds a mix of alternative music and even a little weirdness, in a most positive way. Experimenting led to psychedelic sequences that led to an open mind and ears on my end. The result is songs going off into unexpected directions, to become so much more interesting. The ending of the title song and the middle sequence in Marakaka attest to imagination and inspiration.

On top of all that Hey Are You OK shows the fun Marike Jager seems to have had making her new album. The album holds a lust for life and all that comes with and from that. She's not afraid to kick in a modern dance beat ('Under The Trees') to change the course of the song and the album. What at the start is a singer-songwriter song with a faint hint of an exotic rhythm and a femme fatale sort of singing, is put upside down by the beat. In front of it all remains the indie guitar sound that is at the basis of the whole album. In 'The Seeker' the same happens but then as a full out indie rocker (and then some).

It is surprises like this that make Hey Are You OK a fun album to listen to. Some songs are more appreciated by me than others but overall the album scores very well. It is adventurous. The top song 'San Diego' is The Kinks flavoured yet fits totally into the whole of Hey Are You OK. The contrast by the beautiful vocal melody and the staccato playing behind the voice again provides this contrast defining most songs on the album. Intriguing and convincing Marike Jager's new album is.