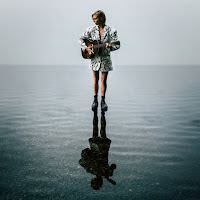 The short version of this review is: girl with nice voice releases nice album. It does completely right to the album on offer. In fact the review hardly needs to be much longer. Why? Find out by reading on.

Anna Ternheim is from Norway and releases her seventh album. (Seven, for me the first though.) She makes it known in the bio that her goal was to produce a sparse album. That is up to debate as far as I'm concerned, but this could be a sparse album by Ms. Ternheim's standards of course. I have no way of telling and no time to find out.

She wrote the album together with Bjorn Yttling, adding the lyrics at a later stage. What I notice is that the album has a First Aid Kit flavour in the more up tempo songs. These songs are not so much sparse as devoid of frivolities. The softer songs or sweet sour ballads all have a keyboard/synth undertone, softly filling up the mix. Anna Ternheim's voice is able to float over it as it were, like the mist over a field in the early morning just before sunrise. Just like she seems to stand on water for that matter.

It is the mix between the two sort of songs that makes A Space For Lost Time an attractive album. It is far from spectacular. As that was exactly not the intention, the mission of Anna Ternheim has fully succeeded. The sparseness leaves out many details that a producer would have added normally, showing his arranging ideas/skills, draws the attention to the quality of the songs and the voice of the singer. Both are more than okay. In fact, I like listening to this album. And that is what it comes down to, doesn't it? And why I do not need to write more.