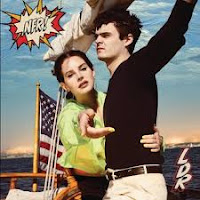 The F word in an album title?! That usually means end of career in the U.S. of A. The first word on the album is "Goddamn"?! What is Lana Del Rey thinking? Luckily on the cover it just says "NFR!" and "LDR". So most people are unlikely to ever find out. At times it is quite relaxing to live in The Netherlands, who cares about the F word? Most people don't and the rest is a member of the association against swearwords. "Don't parrot" used to be their advertisement slogan in the public space.

Enough about F words and other distractions. Before me lies the new album by Lana Del Rey, an artist that has beguiled me over the past years. Especially her second album 'Ultraviolence' and third album 'Honeymoon' agreed with me. The last one I did not care for at all. 'Lust For Life' seemed an attempt to catch up with the Katy Perry's and whatever latest girl craze. Another mention worthwhile making here, is how many artists Lana del Rey has influenced in this decade. Truckloads full it seems sometimes.

On Norman fucking Rockwell! I hear a return to form and more. Lana Del Rey not only returns to what she is good at, slow, moody songs with a hint of relaxation mixed with depression. On NFR! she takes this mood to another level. Reclining in her lounge chair she observers the world around her and lets nothing disturb her new found tranquillity. So in a sense nothing happens in several of her new songs. It is all about the mood she creates for the listener. Anyone who allows to go with that flow is bound to become mesmerised by her voice, the stories she sings and the bare music accompanying her.

For most of the album Del Rey worked with Jack Antonoff, co-writing and producing. In the lyrics it is a coming and going of references to other songs and artists. 'Cinnamon Girl' even made it to a song title. Together they have created a totally laidback, yet so intriguing album. The 9.30 minutes plus 'Venice Bitch' takes the listener through several moods, mainly created by a change of instrument and/or sound. In all ways this is a Californian album. Nothing NYC hectic is left in Lana Del Rey's music. Hiding behind shades from the sunshine, is a description she should be able to live with.

'Doin' Time' is a song with in total of nine composers and the only one excluded Del Rey herself. Two Gershwins, Rick Rubin, three Beastie Boys and three Sublime members. "Summertime'' indeed. The cover combines different songs in the 100% Lana Del Rey style but with a little more urgency. The mood of leisure returns with 'Love Song'. Just a piano playing sparse notes and synths creating little carpets of sound for Lana to rest her voice on.

Fans are treated to 14 new songs that deliver what is expected and more. To think that another album is already announced for next year. A hard working woman Lana Del Rey is for someone who creates the impression to always be sunbathing or sunhiding with cocktails at hand. Remarkable.