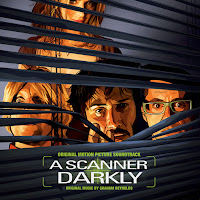 Recently a few movie scores were dropped into my digital mailbox. Now I have never been one for soundtracks. Usually music passes me by during a movie, being focused on the pictures and text in front of me. Some pieces of soundtrack are inescapable, like the weird music by Angelo Badalamenti for 'Twin Peaks' and Ennio Morricone's music in 'Once Upon A Time In The West'. Other moments are when "real" songs come by and recognition kicks in. So the number of soundtracks in my collection is one by Bill Wyman, only because he was a Rolling Stone at the time and the one I already mentioned. That may be it, one or two musicals excluded.

Now A Scanner Darkly. What does this music mean without the picture? Nothing. So the music has to stand its own ground. Also nothing in the music I'm hearing leads me to the thought that I ought to go and see it. I strongly doubt it even will make cinema's here.

Let me change my tack here. I just found that the film is from 2006, so no, I haven't seen it or heard of it. The film was produced by Richard Linklater and featured Keanu Reeves and Robert Downey Jr. among others. It sounds like a movie for sci-fi and drug aficionados.

Graham Reynolds is a revered musician, who plays jazz in a trio, but also is the composer of symphonies and operas. This is not surprising hearing this soundtrack. Very different sounds, compositions and moods come by. From a string composition to combinations of instruments like violins with xylophone as a lead instrument. Modern soundscapes come by with 'Twin Peaks' like lead guitars and mystery in all the way the music is treated with effects. As if time goes backwards instead. The twangy surf guitar followed by a saxophone will be underneath a funny part, without much text.

The fact that I have listened to this soundtrack a few times shows that it is listenable as a independent piece. Then I am ignoring my need to have melodies to sing along to, the kind of interactions with songs that step up and kick me in the face. On this soundtrack nearly all is in the background, subdued, as it can not take too much away from what is happening on the screen. The moment I start listening to music in a theatre, something has gone wrong horribly with the movie. So many of the compositions on this album just go by. The others that are somewhat louder undoubtedly will be a sequence under a chase or something rather exciting. Others are just sounds. Meant to be subjected to pictures and don't really have a right as an existence on their own.

So, do sountracks and I go together? No, not really. It was fun to try it out for once and A Scanner Darkly has its moments, but I'm simply a song man.