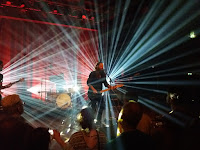 The support finished playing, took of its gear and five men enter the stage and get their stuff together. It's Strand of Oaks. Some intricate sounds between the two guitarists are exchanged and they leave the stage again. Everything set to their liking, with no one from the outside interfering. A fairly rare sight nowadays. Not so long ago I saw two roadies mixing drinks for band members on stage. Here there was one man, laying out the setlist, distributing water bottles.

Again I had to go up all the way for a show in Tivoli Vredenburg. Flights of stairs that seem to have no end. Each time I'm there it surprises me how high up one can go in the building. The room itself appears to be somehow floating underneath the roof. The way there is so open, that it seems like nothing could be supporting the structure high up.

Strand of Oaks has featured a few times on this blog. At least three albums have been reviewed over the past years, so when 'Oor' offered a free ticket I knew it was time to go and see the band live.

The show started with my favourite song from the 'Heal' album. 'JM' is this Neil Young sort of 'Cortez The Killer' kind of song. We were 10 minutes into the show before the 'JM' jams were over and the audience all warmed up. By then the venue had filled itself quite nicely. It may not have been sold out, but standing together was just comfortable, so a good turn out. As soon as the first outburst in 'JM' commenced it turned out what a great band Timothy Showalter has gathered around himself. Explosive, subtle and everything in between. 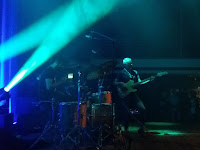 Especially around the intro of songs, while either of the guitarists were tuning, the drummer showed some nice subtle playing or the lead guitarist played all these little motives with harmonics and muted notes, creating a great atmosphere in which to start the song as soon as Showalter was ready to commence. Despite the fact that I was listening to warming up notes, in between things, these moments set the tone of the evening. Creating small moments of magic that the show profited from 110%.

What surprised me most was that Strand of Oaks' front man seemed to have a good time. From the little I had read about him in the past, he seemed to me someone who never smiles or enjoys things. He sure did this Friday evening in Utrecht. The audience response and sheer appreciation clearly resonated within him and was returned abundantly. So much for reading impressions.

What amazed me was the playing of the lead guitarist. I did not get his name, but a quick Google search tells me that his name is Jason Anderson, a singer-songwriter on his own accord. Equipped with a beautiful guitar, with bird in flight inlays between the frets, he played with an ease that just makes my mouth drop and stand in awe of the beautiful sounds and all the right notes that fly out of his fingers.

But let's not forget the rhythm section. The interaction between bass and drums is phenomenal, while both individually are great players. When things go so smooth in the background, it is easy to excel up front and that is what Anderson and Showalter did. The songs moved smoothly forward enrapturing the audience by the song. 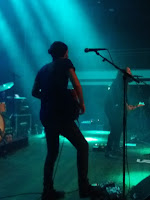 Strand of Oakes plays music that can only be called American from the outside. That can fall two ways with me. This band is totally on my right side. The balance between the instrumental and the vocal parts remains no matter how long an instrumental jam takes, simply because the songs nearly always have enough melody to remain interesting. Even songs that consist of three chords, the melody between those chords are interesting to follow. In others, like 'Radio Kids', there is this delicious guitar riff that keeps coming back after each chorus. The kind it is impossible to get enough of. And when the band really rocks out, like in 'Rest Of It', it has the right punky attitude to really go out there.

My live introduction to Strand of Oaks was an extremely pleasant one. Not only did I have a good time, I was impressed several times by what Strand of Oaks presented on stage and I could tell from the faces around me that I wasn't the only one. Next time hopefully another venue size up? That would be a good thing for this band, as the latest album 'Hard Love proves also, it is ready for the next step.

You can listen to and buy the music of Strand of Oaks here: