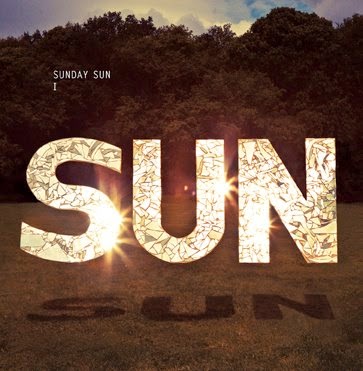 For those who follow this blog, this post is not going to be a surprise. Sunday Sun is a regular costumer since its early days. The EPs, live shows and interviews, they have all come by. Today another live review, just under a year from last year's.

If anything shows at shows through then it is the joy these four guys show when performing. Large smile can be seen on their faces when they play and even more when they sing. Sunday Sun is able to find perfection in the harmonies. Every time a challenging four part harmony is brought to a successful end, I saw the grins widen. On stage and in the the acoustic after party around the LP-sticker-tshirt booth of the band. The moment those interested are able to join in and can try to find the fifth layer harmony. Seeing the four up so close, some of the mysteries of singing are divulged. All four do something different and stop or start for a moment, use another word or sound. Add all those moments up and magical harmonies are created on the spot. And we all got to join in.

The show was a whole step better than last year's with Bade. Not only because this time all the new songs were familiar to me, also because there were a few more experiments in sound and the band gelled just this little bit more.

For the rest, Sunday Sun is my kind of band. All things The Beatles come out. No one is that good, but Sunday Sun certainly has its (magical) moments. 'We let go' is a fab album by a band consisting of ideal sons-in-law that are proud to play in a band like this and have the songs to boot. Whether they will ever grow much larger than this, I have my doubts there, but as you'll have noticed in the past three years and some of this blog, it won't be my "fault". 'We let go' ought to be a number one album in this country and several others as well and several songs should be hits, starting with 'I call you honey'. That this isn't the case in a @#$% shame.

The past two live shows and a televised show of Ray Davies showed him working to hard on the audience. Cut it out I thought, I want to hear you sing. The message here is: "Don't overdo things". For the rest near perfect show gentlemen! But what a contrast with Lucas Hamming who is up tomorrow.