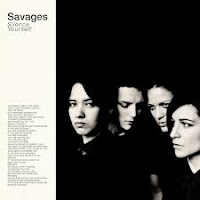 You can listen to 'Shut up' here.

Savages is a band that doesn't mind setting the listener on the wrong foot. Kicking off a first album with spoken word, what sounds like fragments from a movie, seems not like it's the smartest move possible. Undoubtedly there's a deeper message hidden in there, but it goes right passed me. It is when 'Shut up' kicks in, that the deeper meaning of this album reaches me. It is just before 1980. Nina Hagen Band, Patti Smith Group, Lene Lovich are scoring hits and the first two have made great albums. U2 releases its first album drenched in echo. There's punk music and that much vaguer moniker new wave in the air. That is what Savages is recreating here and doing a good job at it at that.

Savages is a band from London, around only since 2011. Jehnny Beth, whose real name is Camille Berthomier sings, Gemma Thompson plays guitar, Ayse Hassan is on bass and Fay Milton bangs the drums. After the start things went very fast for the band. Within a month a support slot, then an EP and now a first album. What is somewhat funny is that from reading the first review, I had a totally different impression of what Silence yourself is. I'd expected a lot more keyboards/electronica where I got guitars and more guitars. Guitars with sounds the likes of Robert Smith, Andy Summers and The Edge got famous for and an echo on the voice of Jennhy Beth, that was on every album around 1980 that had a post punk band from the UK's music on it. As if she's singing in the bathtub of a giant bathroom. Real Steve Lillywhite. A fuzzed bass adds to the atmosphere.

How delicate the balance on Silence yourself is, is proven by the fact that some songs are extremely exiting, while some others are utterly boring, where nothing seems to be happening. Mind, within the same song. 'City's full' has these dull parts and these totally addictive eruptions. There are intermezzos of quietness breaking up the urgency of Silence yourself, breath-catchers. The overall feel is one of urgency, directness and sleaze. Driving, pumping bass. A big city record as in London City. A statement in sound and noise. With 'Strife' as the total winner of all.

Enough said. This is an album every self-respecting rocker, punker, new waver, etc. must hear. Silence yourself matters in 2013 as it would have mattered in 1980 and far better than that doom and gloom of the era.

You can order Silence yourself here