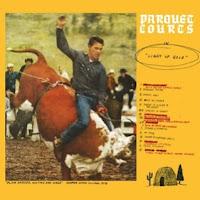 You can listen to 'Stoned and starving' here.

The name of this band, Parquet Courts, was singing around for a while. Something you should listen to. And so I did. "Mater of my craft' comes flying in something like putting on 'Is this it?' for the first time. Very direct, in your face. Punky, garage rock. Been there done that? Well, not exactly.

Parquet Courts is around for two and half years at this point in time, having started in Brooklyn late in 2010. Despite that Light up gold is the band's second album. In 2011 it released the tape/lp 'American specialities'. The band consists of Andrew Savage (lead vocals, guitar), Austin Brown (guitar), Sean Yeaton (bass), and Andrew's brother Max Savage (drums). A classic rock/punk line up and that is just what we get.

My first impression was it's good to have a new The Strokes with the balls to play up tempo, relevant rock songs in 2013. My third and fourth impression was that Parquet Courts is a band very much in its own right with a few fine songs to its name. From 60s garage rock to The Velvet Underground and late 70s UK bands on the verge of punk and new wave. These staccato played songs reflecting the doom of a pending nuclear war are played again by Parquet Courts like there is no tomorrow and if there is, it may be lived 'Stoned and starving', "flipping though magazines".

The way N Dakota starts reminds me so much of The Velvet Underground. Andrew Savage has this same sort of singing as Lou Reed, going into his lower registry in an under-cooled way, dubbed one octave higher. Not aimed to please, but to grab attention. Like 'Stoned and starving' is the 2013 version of 'Waiting for my man'. The scenery having moved from Lexington to Richmond, Queens. Television meets The Velvets meets Parquet Chords. This song is extremely cool. Hardly any chord changes, just this exciting guitar playing that goes on and on. Ending it all in feedback of the lead guitar. Some songs also remind me of The Black Angels, without the psychedelic sauce, this Austin outfit dabs itself in, but very clearly there is a connection here.

So, if you'd tell me "there's nothing new here", I have to admit it straight away. Parquet Courts taps from well known sources, but as long as a band produces an album like Light up gold there's nothing wrong with tapping well known sources. It is the quality of the songs that count. Do I like them all? No. 'Caster of worthless spells' is a bit without aim, I'll forego on the obvious pun. And 'Disney P.T.' is a bit too simple. It does not mean that Light up gold goes out like the proverbial night candle. 'Tears o plenty' is a return too form. Lyrics are sang by Andrew Savage to us half time, under which these cool guitar riffs and notes are played. Savage and Brown have it in them to become a great guitar tandem. The final song 'Picture of health' goes all out. A heavy distorted guitar, a tip of the hat to Iggy Pop and REM 'Monster' style. At the edges of the spectrum there are these second and third voices repeating the melody just behind the original creating a great effect in the impending doom of sonic onslaught that's going on in the studio. While modestly put in the mix to greater effect.

Light up gold presents the listener with restrained excitement to create a maximum effect. Light up gold may not be an overall success as the album does know some dips, but Parquet Courts certainly give prove of its potential. I would not be surprised if the band tops this album easily in 2014 with an even better album. Great fun, Light up gold is.

You can order Light up gold here