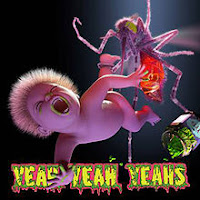 You can listen to 'Mosquito' here.

Mosquito is an album that I've played the most in the past two weeks. More and more this album drew me into this world on the verge of rock, dance, electronica and pop. From the very start where singer Karen O sings in this sweet voice "Fallen for a guy" with just a bass note to accompany her I'm a goner. And then this distorted shout that breaks up the idealism Karen O and band seems to go for. It's adventure time in 'Sacrilege'. Yeah Yeah Yeahs manages to keep this adventure up most of the time.

To stick to 'Sacrilege'. This danceable song that starts so sweetly, ends all out gospel. In between the tension is built up and up. There is not much of the sweetness left, more pain and despair. Perhaps the message is never to fall in love with a guy who fell out of the sky. Next, a song without drums, but the rhythm of the subway car that is sung about in 'Subway' is part of Mosquito. There's all this electronica and synth weaving going on, but even in this second song it is clear that guitarist Nick Zinner is able to provide beautiful little guitar melodies that split a song in two and make it special. 'Subway' is a beautiful song. The fragile voice of Karen O evokes a sense of longing and distance at the same time, like a human robot almost. Like somebody who is not able to come from her place no matter how much she longs to do so.

'Mosquito', the title song which you can find twice on the album, brings Yeah Yeah Yeahs very close to Danish pop band The Asteroid Galaxy Tour. Mette Lindberg is not very far away here. Luckily Karen O can sing not as if on Helium also. It's only when she uses more power that things go a bit awry vocally. The result is that Mosquito is a lot more pleasant to listen to. 'Mosquito' is also the first song in which drummer Brian Chase is really heard, up tempo and louder. In other songs there is also a lot electronics involved in the rhythms. Like in the music on the album as a whole there is an awful lot more involved than just voice, guitar and drums which the line up of Yeah Yeah Yeahs, officially is made off. Not that Mosquito is over-produced, far from it, but there are loads of sounds that come by. Making the album at times eclectic while at others these sounds give Mosquito its moments of rest and reflection.

What I'm really surprised to hear is the keyboard sound that made Air famous with 'Moon safari'. Pushed away into the mix of 'Sacrilege' they make the middle part of the song even more special. Karen O's voice would definitely work in an Air setting. I can hear her singing 'Kelly watch the stars' quite easily. The power of Mosquito is that it also manages to bring influences from dance into a rock and pop atmosphere, but is incredibly exciting at times. If you listen to all the layers in 'Under the earth' you will know what I mean. A lot is going on in a slow tempo, but danceable song. This album has layers of tension that creep right under the skin. A lot is going on at the same time, which leads to listening again and again.

Mosquito is an eclectic mix of many musical styles that all come together in interesting melodies, beats and the light, sometimes ethereal voice of Karen O. Together they make one of the more interesting albums of 2013 so far. Where Yeah Yeah Yeahs previous albums never really made an impression on me, Mosquito grabbed me where it should: right between the ears.

You can order Mosquito here