Our dear lady of the plains. Rogier Pelgrim 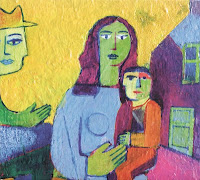 You can listen to 'Our dear lady of the plains' here.

Early last May Rogier Pelgrim played the support slot for Handsome Poets (read here). As he stood his ground, with the songs deserving attention from the audience, I thought it time to check out his debut album, Our dear lady of the plains.

A few of the songs sound familiar, having heard them at the Paradiso. Pelgrim is a Dutch singer-songwriter from Ede. Last year he participated in a singer-songwriter talent show on Dutch national tv, a show that has led to some talents that broke big in 2013. Pelgrim is not that far yet. Those with a keen ear for music will have spotted him by now. Presently he is in pre-production for his first full length album.

Our lady ... is a seven song mini album. What stands out most for me, is the intensity of Rogier Pelgrim's singing. Emotion is rife. A few of the songs sound familiar, having heard them at the Paradiso. The show was sober and so is the album for the larger part. Rogier Pelgrim is centre stage with his high and higher climbing voice, closely followed by his acoustic guitar. 'Memories' is not the best song for me, but it is very real. Minimal guitar, all voice and the desperateness of a spurned lover, who seemed to have made some mistakes. The best moment of the EP is when Rogier Pelgrim shouts out towards the end of 'My mind's tramp' after which the guitar sets in again with this melodic chord progression. This is one of those rare moments in listening to music that tinkles go down my spine. It happened live and again the first time I heard it on record. The moment when the band kicks in half way 'My mind's tramp' is another gem of this EP.

Not all is well on Our lady ... The final song is irritating. There's no other word for it, with the radio fragments at the start, no matter that it's meant as a joke. 'Arin Island is only so so. I have to get this of my heart also, but having said that, I think Rogier Pelgrim might be going places. Most songs on this EP are above average and have something that makes them worth while. Next to that I heard a song live which I thought to be the best of that set, that is not on this EP. If Rogier Pelgrim manages to get just that little more depth and variation in his repertoire, his new album is going to be something to look forward to. I am any way.

You can order Our dear lady of the plains here on is own website.
Gepost door Wo. op 10:43