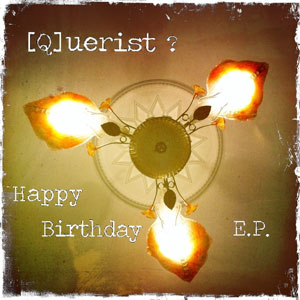 You can listen to 'Know when to let go' here.

A few weeks back I received a Tweet on @WoNoMagazine with a message saying my debut EP is released and a question was added whether we liked it enough to do a review. This being a friendly invitation to listen, I decided to take up the challenge. Why not? And I have to say straight away that [Q]uerist? makes the sort of music that I never listen to or get away from as soon as I can. I fully realise that this is quite a disqualifying start for a review, isn't it? Hang on in here and I will try and explain why I like Happy birthday any way.

[Q]uerist? is Rob Nakken, bass player of The Light Parade from The Hague and 50% of dance producer duo from Amsterdam and The Hague, When Logic Fails. Next to this Nakken is also active as a producer and a collector of vintage synthesizers. He doesn't just collect them, as you can hear on Happy Birthday, he makes full use of them too. All sorts of analogue and digital sounds are all over the place on his debut EP. A nice fact is that Happy birthday was released on Nakken's birthday in March. A nice gift to himself.

As I said I'm not a fan of 80s synthesizer/dance music. The likes of Yazoo or Depeche Mode, Deutsche Welle and a lot more obscure synthesizer acts behind all this. But almost each act has a few songs in which all seams to come together for me. Sound, melody, vocals in a winning combination. 'Everything counts', 'Nobody's Diary', 'Stop', 'I just can't get enough', 'Blue monday', 'Enola gay' and 'Joan of Arc (Maid of Orleans)'. Just to name a few. Songs in which the 80s doom that hung over nearly everything in those days was over ridden by a great melody with memorable hooks. It is this quality that [Q]uerist? shows on several songs of his six song EP.

Happy birthday kicks off nearly relentless. 'Intoducing Querist: Secrets' starts off with this hard, harsh, confusing synths sounds over a fierce rhythm. Slowly a melody comes over the driving, pulsing synths, creating a tense atmosphere. The treated voice adds to the tension. The twists in the song make it interesting to listen to, as it's never certain what will happen next, without making the song hard to follow. And it was here that I started to really listen. This is interesting!

'Know when to let go' features B.O.B. on vocals. Again a song with modern beats at its basis, but with great melodies written over them. It provides the song with joy and fun. Airplay that was given to the song on several Dutch radio stations is only well deserved. The same should go for the second song with B.O.B. on the EP, 'At the party'. By this time there was the name of another band scratching the back of my skull asking for attention. When the 'o-o-o' started off the final [Q]uerist? song on this EP, 'Old man's ship', I knew what it was: A Brand. Although this band does everything on guitar, no matter how outrageous the sound, a guitar makes it with the aid of a lot of electronic "friends". [Q]uerist? is a little less over the top than his Belgian colleagues, but the comparison is there and this is meant as a compliment.

The EP ends with a song of the band Rob Nakken plays bass in, The Light Parade. He made a remix of their song 'Walk with you', which is a bit of an odd one out on this EP as it is less outspoken than the other five songs. The change from 'Old man's ship' to 'Walk with me' is very abrupt. Perhaps it would have been better situated in the middle of the EP than at the end? It doesn't take away anything from the fact that I was very pleasantly surprised by this EP. Nakken has a keen sense for multi-layered melodies, making Happy birthday an ideal mix of pop-rock-beats and dance.

You can order the album here