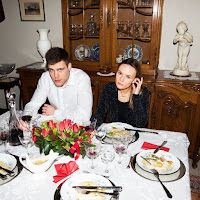 One of the records that I did not come around writing about before the summer holidays is another great rocking album. Family Dinner had come by regularly but remained on my to do list. It is time to get it off there, as the energy burst this album is deserves a spot.

Ever since the great record by Shame was released early in 2018, in the music press there's no end to comparing a new rock record to Shame's 'Songs Of Praise' as if the album has become the standard in modern rock. It says a lot about the standard this record set in a short while and rightly so, as it is one of my favourites of the past two years.

Whatever the band was, and yes, I'm slowly moving towards Sons, they never matched even closely to my ears. Not until I listened to Family Dinner I found the same amount of excitement in the music itself and in my response to the album. Sons manages to capture a whole surge of energy on record.

The opening of the album is a statement. It is a long drum rhythm that opens 'Family Dinner', the title song. Already there is so much energy released by Thomas Pultyn. Around him a lot may be going on in the meantime, it is his rhythm that is the gravitational force of the song. His band members are allowed to play off of his drumming. In 'Family Dinner' the drums is not a supporting instrument but fully in the lead.

Just like it is the bass that opens the second song 'Ricochet'. It is in this song that the subtle elements in Sons' playing and singing are truly revealed to the world. A ooh in the background, a lead guitar that flies off in a few notes. Sons captures melody within the energy of its rock music in a way that draws, captures and keeps my attention. This is the kind of song to blare along to at shows. No standing still is possible as well.

A third element in Sons' music is the superb use of dynamics. The band knows how to give a song inner dynamics to make the point in questions extra loud and how to keep attention drawn to the song despite just a fierce drum beat without any other instrument playing.

Without trouble this Belgian band of twenty-somethings manages to surprise the listener with their take on rock music. A bit sleazy, a lot loud, some psychedelia, but always with melodies and surprising elements. Sons manages to capture the energy they have within their heads and undoubtedly the energy they manage to create together on its record. The result is an album that is hard to resist.