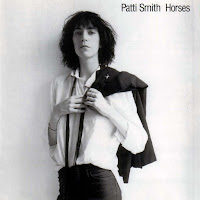 In September Wo. reviewed 'Just Kids', the autobiography by Patti Smith. At the end he promised to review Horses in celebration of the album's 40th birthday. So here he goes.

In the winter of 1976 I was in my final high school year, for some years to come that is. On Tuesday afternoons the VARA broadcasted the album top 20 and if I cycled home like crazy I would be in on time to operate my small cassette deck wired to the radio. The start of Wo. as the lover of albums. One of the albums that entered the album charts during that one school year that I was able to listen from 16.00 until 17.00 was Horses. I distinctly remember hating it. That Patti Smith person couldn't sing, the songs were horrid noise. This sucked, major.

All that changed with 'Wave', which I still think is Patti Smith's best album to date, in 1979. Did I get to like Horses? Well, I never really gave it a second chance I noticed. The opening song, yes. The cover 'Gloria', the hit of Them in the mid 60s, vamped up by spat out lyrics that have nothing to do with the original. "Jesus died for somebody's sins but not mine". Excommunication and eternal damnation, I'd say and who cares 40 years later? Not me. 'Gloria' is a glorious rocker. Singer and band cook it to phenomenal heights and a level that Van Morrison may never even have imagined in his wildest dreams. Patti Smith's lyrics and presence do the rest. Remembering 'Just Kids' here is somebody who never imagined being a performing artist let alone a singer and now spearheading the punk/new wave movement of New York.

Reading up a bit on the album is when I really become conscious of how big this album is. 4,5 and 5 star reviews all around. Something I never heard at the time. Something I can easily mend in 2015. Horses still is exciting almost 40 years after its release in December 1975. The album has a sense of urgency that is rather unique and that has everything to do with the interaction between the hurtling, stuttering, exhorting singer and the band that does everything in its power to keep up and follow, without selling its singer one inch short. Compliments have to go out to producer John Cale as well as he managed to capture all this, including the timelessness of the performance. The performance still speaks volumes over the decades gone by. This album could have been made by a punk band in 2015.

And all that while Horses may have been a hasty affair. There are several covers on the album and some real poems set to music. This isn't yet what the Patti Smith Group would become in the years to come. When truth be told, Patti Smith and band had to find their own musical voice and not somebody else's. At the same time they had found so much power and prowess.

Wilson Pickett's 'Land of a Thousand Dances' is reformed beyond recognition. Patti is firing off lyrics from two angles. The band recreated The Velvet Underground around and beyond here. Pounding away relentlessly creating a sonic storm.

Horses also shows how held back this band could play. 'Elegy' is as soft spoken as the title suggest. The under current remain spot on though. There's no escaping the intensity of Patti Smith. Waves roll over the listener and he is not released until the final note. If ever. The version of 'Free Money' has to be the final one. Horses may just be a very addictive album after all. (In the modern cd era, the magic is broken by the totally punked up version of The Who's 'My Generation'. Hurtling, falling apart, screaming and crying and John Cale doing a musical John Entwistle impersonation. This version does help putting another record on.)

You can listen to 'Gloria' here: