The LVE. The LVE 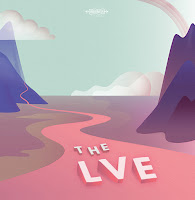 The LVE has featured on this blog twice with an individual song. Uncommon for this blog as we usually review whole albums or shows. Listening to just one song gives an opportunity to really pay attention to what is on offer, without a need to keep an eye on the whole product and everything surrounding it. That way I could get under the skin of the then still called Lighting Vishwa Experience's single 'Love When You Don't Want It'. One of the best songs released this decade.

This qualification sets a bar raised so high that I almost did not want to open the link sent to me by The LVE's singer and songwriter Gerrit Van Dyck. I was truly in fear of being very disappointed. Let me start by saying that I'm not. The LVE totally lived up to my expectations. Better, exceeded them. In several of its songs they capture extremely pleasant moods in a very successful way. The LVE has this laidbackness as if the whole world and all that comes with living in modern lives was locked out and had no way of getting in and influence the recording process in any way. If anything that is the greatest feat of this album.

It opens in a strange way. For about a minute I thought I opened the wrong link or something. Nothing what I had expected to hear presented itself. Is this the same band? Is this an unknown side I hadn't heard yet? Yes, that certainly, but after this intro called 'Hello' the album continues with the already known 'Milky Sea' and all my anxieties were put to rest. What unfolds from that moment on can only be captured in words like inner rest, tranquillity and above all: beauty.

Where to start? Let's start with the interaction of the voices of Gerrit Van Dyck and Sara Raes. They are truly complimentary as both manage to sound relaxed, nearly lazy, while both capturing the right emotion, every single time. Van Dyck is not afraid to hand over the leadspot when the moment calls for it. Around him he has found band members who all play in other bands, as is a true Belgian tradition of the past 20 years. Together they make Van Dyck's originally solo, lo-fi home recording efforts a true band one.

There is a major downside to The LVE though. Each time I put the album on it is over before I know it and I have to put it on again. The upside is that I put it on again straight away. I want to hear that little guitar line in 'Little Sunny' again, the parts sung together, the opening line that reminds me of "Here Comes The Sun'. Coincidence? My guess is no. (Also listen to 'Water Blue' although that one is totally obvious.)

The new single 'Closer' is another small miracle of the mood The LVE can create around a song. This is a song that in the end is rather fleshed out. More and more keyboards are added, giving it an 80s flavour. The song starts extremely small with an intricate guitar line and a lot of electronic things going on in the rhythm and keyboards in a modest way. As such the build up is well done. 'Closer' holds elements of dEUS in it, mostly in the rhythm and the way of singing. Then a beautiful guitar solo comes by before the keyboards take over and the song becomes bigger. Was 'Instant Street' an influence here?, it could well be.

Sara and Gerrit go at it together in 'Hi On Love'. One of those songs that can best be listened to with eyes closed, headphone on and I let myself be swept away by the modesty and beauty of the song. There's almost nothing going on it seems, while it says it all. The voices really get into my head and play around there in their lazy Sunday afternoon kind of way. While the instruments follow in the same relaxed fashion. The same goes for 'Monami'. The song just floats. Like the most pleasant daydream in a life where all's good.

There can be only one peak that is the highest in a mountain range. That remains 'Love When You Don't Want It'. I have said all that there is to say last year, but stand by my words. No one I played the song for was not moved. In short it ought to be a number one record. Who has the contacts with DWDD and the likes? Who contacts Giel Beelen's team? Get to work!

The LVE has come up with a beautiful album, containing all that I wished for. Taking into account, that all this beauty was created on the side of very busy lives, my admiration only grows. You have a fan, The LVE, but you already knew that.

You can listen to 'Closer' here:

of buy The LVE at