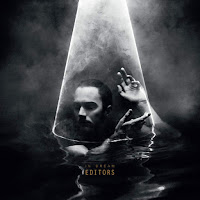 How time flies. It is at times like this that I realise that fact once again. The first Editors cd is ten years old this year. That means it is that long ago that my then colleague Cynthia raved about this new band she heard (and dropped as usual with the second album). I didn't hear it though. Too dark for me that voice. I never really got into the band until that single of the previous album, 'A Ton Of Love'. That was a pop song in a rock setting if I ever heard one. Not representative for the rest of the album I found, but still.

In Dream is nothing like that album. Guitars have sort of disappeared and synths and piano have the primary role. Not so strange considering that Tom Smith, who is the leader of Editors, is a piano player foremost. What I notice firstly listening to In Dream is that a lot of the songs must have been deconstructed after conception to the vocal melody and then built up again. This way Editors could create something completely new. Other rhythms, other instruments, other moods. My second thought is Depeche Mode in a somewhat more organic and less industrial mood. A song like 'Enjoy The Silence' does come to mind though.

My third thought is, yes, I'm impressed. Tom Smith lets his overly depressing, deep voice go at times and plays with timbres and heights and opens up the Editors world and lets some light in. Perhaps not a lot, but just look at the sleeve. Light in an high art kind of way, illuminating only what needs illuminating. 'Forgiveness' has a deep bass line, compensating for the voice perhaps. The voice(s) go all over the place, even into falsetto territory. This opens everything and makes the song a pop classic with some weird elements in the rhythm and dressing up, but this is near pure pop.

In Dreams opens with 'No Harm' which is a statement of intent. Dark, darker, darkest sounds. The intro could have been part of the score of 'Skyfall' during the scenes in the dark, gloomy house. The falsetto voice is one of despair of someone seeing everything crumbling down around himself. The music goes back to the days of Ultravox' 'Vienna', but slower and darker. So we enter Nick Cave territory, if we think away the higher registers of Tom Smith's voice. This song is absolute beauty of the sort that can hardly be seen, totally obscured by dusk's shadows. An impressive opener to the album. Luckily it is not followed during the whole of the album. 'No Harm' is simply too gloomy.

With a female voice gracing two songs in total, Editors changes the sound of its songs completely. The higher and faint voice of Rachel Goswell (singer of Slowdive) goes around Smith's voice with ease. The light piano melody in 'Ocean of Light' makes much more sense this way. Justin Lockey's guitar comes in to the song like the guitars in Coldplay. No chords, just a motive playing around somewhere in the song, colouring it in, not carrying it.

I have to admit that In Dream does not keep my attention like the first songs do, but Editors and I have come a long way for me to write this much. In Dreams has moments that are monumental. Huge, though as clear as crystal, strong, but sensitive, robust yet fragile. Behind the vast electronics is a band that shows emotions. Feelings that can be imagined to have come from the isolated recording sessions on the west coast of Scotland, with nothing but the elements around the studio.

The 80s are back. 'Life Is A Fear' brings it all. The Cure, Depeche Mode, Tubeway Army, they al shine through here. Another great song with a simply gorgeous synth line (China Crises anyone?) and a disco beat that Donna Summer would have found her way in during the mid 70s. The ambient world of Brian Eno floats into 'The Law'. Together with electronic drums, synths, 'People Are People' and Ms Goswell taking part of the lyrics, something happens which sounds so familiar. And then that delicious guitar notes come in as well. Fingerlicking good. it's so sweet, 'The Law' is. Although In Dreams is modern, the overall feel is 80s. Doom is around the second corner perhaps and not on the corner as in 1980, but still. That feel is there with better songs then most could produce around that time of old. And then a final name pops to mind, a singer that is behind all this mentioned and more. A name that explains it all for me: David Bowie. Bowie's darker periods sound through here in a clear way, lifting In Dream even a level higher.

As I wrote Editors and I have come a long way of mainly not communicating to each other with an odd exception here and there. I never gave up though and finally it paid off. In Dream is a beautiful album and has moments of extreme beauty. Enough said.

You can listen to 'No Harm' here: