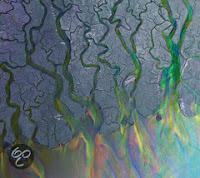 That Alt-J, when telling people that I went to see the band, mostly gave a blank stare in return: who?, their faces asked me? Yes, that Alt-J. Next always followed a very difficult question to answer: What kind of music do they play? Well, something alternative, rock, indie, some folk, lots of strange rhythms and synthesizers and flute and ..... The blanks on these faces just grew emptier and vaguer. That Alt-J.

Simply too little people seem to have heard of the band and that showed at the Ziggo Dome. Half full? That is still a lot of people of which some around me showed total devotion. The Alt-J that gets little to no radio play. Just mentioning the show on the radio in the morning and not playing a single song, is a bit weird, Giel Beelen. This band deserves some airplay, even if it is a bit far out there..

Nothing happens at an Alt-J show. Well almost nothing. At best the keyboard player sips his drink or one single dynamic guitar stroke the moment before the show ended. The three men standing even dress the same. A black t-shirt with grey tending towards black pants. In other words totally nondescript. Except for the drummer, who is omnipresent in sound and motion. His drums sounded so full. An effect was added that made them sound like they were played in a large hall (or dome in this case) filling the whole dome. What a sound, so clear and so extremely varied. If someone stole the show it was Thom Green. His sound, energy and varied drumming makes it possible for Alt-J to play these large venues. The songs as such lend themselves, exceptions noted, for intimacy; for head phones in privacy.

This was my first in the Ziggo Dome, while I'm preferring small venues more and more. All the stories about how good the sound is all came true during this show. At times even fantastic, as so many subtleties in the music came alive. The seats are fine and the view of the stage excellent. 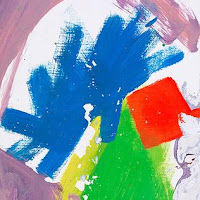 Time for Alt-J again. The band is near total static, uncommunicative. So there is only one thing to do: play the songs in the best way possible and this the band did. Starting with the aptly titled 'Intro' Alt-J silenced the room immediately with just the wordless singing. My fear of being bored because of the intense and at times strange setting of the songs, was totally without merit. So many sounds came alive during the show and not even a lot came from pre recordings was my impression. Alt-J has learned to get a maximum effect from the sound eruptions its music holds within it and dares to bring everything down to just the vocals as well. The dynamics are stressed to maximum effect. The best example is a moment that a single piano note is repeated fast, something any child could play, that is intersected by one loud band crash, after which a new note follows. A startling effect. If we add the light show that was omnipresent at times, we come to the other feature that made the show very dynamic. A lightshow truly supporting the music and the band members, while they played their songs. Songs that are weirdly structured, strangely rhythmed, hardly comprehensively sung, yet so pleasant to listen to.

A lot of songs from the first album, 'An Awesome Wave' came by. Only because I didn't recognise most of them, there was no time to prepare, I could make the distinction. It looks like I have another album to buy.

Alt-J live is an experience. Perhaps almost like going to a classical concert, which I never do. It is totally alright to just sit and listen, eyes closed. It is because of preconception of rockshows that we expect more. Does Alt-J's music need show? Not really, but it's o.k. if it's there. Together the two elements made the concert an experience. There were so many small elements that made me so happy just listening with no need to jump up and dance. A very noteworthy show.

Just one question remained: Where were the flutes? I was kind of looking forward to hearing 'Garden Of England' live.