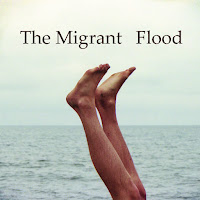 Flood is one of those album that was lying somewhere underneath a stack of records. I had listened to it. It didn't make an impression at all. Something Midlake like and I have enough Midlake's in my life: the real one. I have to admit that it is because I had to really clean up the house that Flood came up again and as I couldn't remember ever listening to it, that I put it on again. Lo and behold, it led to a review within a two weeks.

During my second listen session I was thinking even Radiohead has a band trying to show that it is influenced by Oxford's finest. So that noticed two main influences in one album, but what I also noticed is that The Migrant's songs certainly had merit by themselves. So I listened on and quite rightly so.

The Migrant is Danish musician Bjarke Bendtsen, born in Jutland, but now living in Copenhagen. Bendtsen was turned on to music after hearing Nirvana. There is nothing here that especially reminds me of that event. The same goes that he would never have gone to live in the U.S. without Neil Young and Bob Dylan living and working there. What I can relate to is that he has lived in Austin, Texas, fairly close to the already mentioned Midlake. Although Bendtsen has released several albums before Flood, this is the first I have ever heard by him. So there is nothing to compare and I can listen with a fresh ear. He recorded Flood with musicians from Copenhagen. That's all I can say unfortunately.

From the moment I went deeper into Flood, these precious little stones presented themselves. Those little shiny things that after I dusted them off, proved to be real gems. Opening song 'Climbers' is just such a song. It starts as a singer-songwriter song with a voice like the previous singer of Midlake. When I really started to listen all these intricate little melodies presented themselves. In just such a way as Admiral Freebee does his tricks when he is at his best. Layers of guitars all have small parts, little notes, while the drummer plays this soft marching rhythm. To get that I had to pay true attention to what The Migrant offered. Once I did that I went beyond the superficial likenesses to others without looking back.

Another feature that endeared me to The Migrant's music is the interplay between the acoustic guitar, which seems to be his first instrument, with the electric guitars around it. Although this is not exactly an unusual combination in pop music, the way it is done here caught my ear again and again. So many of them can be discovered. The eerie sounds in the background of the title song, makes 'Flood' so more atmospheric. It already is a moody song or better one with cold emotions and then this sound reminding me of a cold wind in the desert at night creeps up on me the whole time.

Radiohead comes by a lot also. The Radiohead the world doesn't get a lot off any more, being the one of (before) 'O.K. Computer'. 'Street Fade Out' and 'Kharma Police' come to mind regularly listening to songs like 'Belly Of A Man', 'Water' or 'Haunted'. I have started to appreciate what The Migrant offers instead of trying to sing along to another song. All these songs have a quality and inner beauty of their own. Enough said.

Finally The Migrant does an Elbow as well. 'Tiger' has this musical intermezzo that comes close to the one in 'The Take Of And Landing Of Everything'. It's not that good, but comes close. When it all ends with a fabulous, small song like 'Row Row' I know that Flood and I am good. Bjarke Bendtsen stands his own as well with just, it may be, a ukulele, before a few other small things come in. The melody is great and the singing takes the right tone to the song. What a way to end an album.

By the way, I hated standing on my hands under water. It always ran into my nose. So the cover photo is not one of my favourites.

You can listen to Flood on The Migrant's Bandcamp page: