The Monsanto Years. Neil Young + Promise of the Real 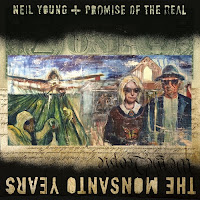 Were it not that I can't shake off the impression that I owe enough Neil Young records to serve me a lifetime, I may have been forced to write that The Monsanto Years, again, is a fine album by "Ome Neil", as I tend to call the musician for a few decades now. Young who turned 70 this year, is churning out records at a high pace. Like they used to in the 70s. One a year or more. He has a lot to tell and this time it is about Monsanto, a company producing gentech biotechnology and apparently under fire from all sorts of organisations and private persons, now including Neil Young, who is protesting like it's 1970 all over again. Although listening to the lyrics it could be more about farmers being forced to make choices than the gentech itself.

I have no opinion on gentech. There's enough to worry about and a food (and fresh water) crisis this world is heading towards. Solutions need to be found and gentech is probably one of them. Let me stop there with personal comments and move towards the review of the music on this album.

Let me start in a very simple way. Boy, am I enjoying this album. The Monsanto Years topic wise may be very heavily laden, musically it has a lightness that is surprising. Neil Young's aging voice can hardly keep up here and there. This band rocks in a relaxed way, just making noise for the fun of it, it seems. Guitars everywhere, rhythm, several lead lines echoing each other and a drummer that is just pounding away. There is a Dutch verb "rammelen", that I do not know a good English equivalent for but that is what Neil Young and his band mates do, rammelen. Rattling comes closest I guess, but if that fits in a musical sense I doubt strongly. This album is all but tight. It's not aimed to be. Everyone knows his part but clearly perfection was not the goal. And that is exactly what makes The Monsanto Years so interesting.

Neil Young sounds inspired on this album, something I could not find in some of his previous albums. The Monsanto Years is an album that may grow into one of my favourite Young albums. In a general way I like his electric guitar incarnation best, although there are very notable exceptions to this rule. They're even on this album (e.g. the county song 'Wolf Moon'). The combination of styles? Whenever his guitar starts growling in combination with a good melody or inspired solo I'm seriously enjoying myself. This album holds some of these qualities.The fun starts right in the first song 'New Day For Love'. The solo notes sound so far out that they seem poised to escape all physical laws.

Promise of the Real is the band of Lucas Nelson that worked with Neil Young to record the album. They are joined by another of Willie Nelson's sons, Micah. Together they recreate the sound of Crazy Horse quite successfully. Promise of the Real fits Neil Young like his old band did. The sound is big, huge, larger than rock as all Young's biggest rock songs do. Although I am puzzled by the mixed reviews the album received, it can only be because perhaps it could have been a more slick record. That puzzles me even more because slickness would have destroyed all this album is as far as I'm concerned. For the rest? Neil Young delivers like only he can. His voice remains one of the first to be rejected in auditions for the local church choir, but recognisable among 100.000s of voices. Unique in rock. His guitar work is just as unique. Dark, slow, sluggish, it has its own voice and tone.

Lifting out a single song of The Monsanto Years is unnecessary. This album is like Ayers Rock/Uluru: a monolith. Huge, hard, as one. It's been a long time since Neil Young impressed me this much with a new album. All have their moments, even 'Storytone' had some in the bare version of the record. The Monsanto Years has nine highlights. All deliver 100% without a doubt.

You can listen to 'A Rock Star Bucks A Coffee Shop' here: