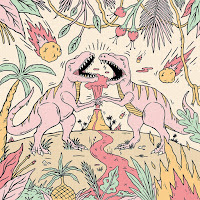 Rotterdam punkers Lone Wolf releases its second album in two consecutive years. Two guitars, a bass and drums. A male and a female singer who alternate the lead vocals. It doesn't sound like much when written in this way, does it? Those enjoying a dose of excitement, fiercely played instruments and a nice melody will not be wrong though. No apocalyptic scenes set on music as on the funny and yet sad album cover to be found with Lone Wolf.

This band understands a good song. The genre of choice may be punk, this band isn't angry or lost in teenage angst. Even 'Something To Destroy' feels like the expression of a nice hobby, instead of wielding The Ramones' baseball bat that scared the hell out of parents 40 something years ago. These people know how to write a melody that is easy to sing along to and then kick it in the butt, hard. They understand that music starts and ends with a melody. Something that sticks into the head of listeners. There are several good examples of that on Together Alone, with 'Runaway' as excellent example.

What amazes me is that Lone Wolf is a band I had never heard of before this record. A band that was totally off my grid. Reading the bio it says they tour all over Europe, played festivals in the U.S. and have this record released in Japan. Undoubtedly the success will be relatively marginal, fact is Lone Wolf goes where its music can take it. And this music deserves to be heard. Take 'Tearing Me Apart'. A song that competes with several acts released on Rum Bar Records easily. It is strong, tight, fun, it simply rocks.

Together Alone may not be special, as this music has been played before and sometimes better. What Together Alone does, is stir up excitement and keeps it up for a whole album and that scores in my book.

You can buy Together Alone here: