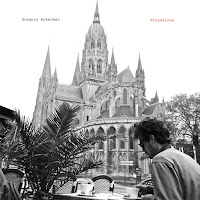 Gregory Ackerman debuted on these pages with his first album 'And Friends'. An extremely pleasant and relaxed album exemplifying his Los Angeles background. At the same the cover art of his previous album and new EP show him as a man of the world who gets around. Here we see him in front of a medieval church relaxing with a cup of coffee, obviously taking the imposing structure for granted.

It may be love that is or makes him stressed, it is not reflected in his music. In any kind of way. He softly whistles a tune while the music continues ever so relaxing.

Here comes the caveat though. It is confusing this relaxed nature as it makes me underestimate what is going on here. It is far too easy to be guided to the disposition that nothing is going on here, nothing that deserves my full attention as it were. It is the contrary I have to brace myself for. Listen with a little more attention and behind that trickling music a whole world opens that shows that at least a part of the music of Gregory Ackerman is not as peaceful as it may seem at first glance.

Of course, 'Follow Through' has that Jack Johnson, remember him, feel, without the faint hip hop features Johnson had in his older songs. It is in a song like 'Dawg' where uglier things lurk in the back or simply burst through the seams, the very fabric of the song. There's no stopping the ugliness in some place, without ever destroying the inherent beauty of the song.

It is Jack Johnson that remains lingering in my mind, where during 'And Friends' it was often Neil Young who spooked me while listening. With Stresslove Ackerman manages to catch the right wave and surf to the very end. The relaxedness of 'We've Got A Runner' is totally genuine. Little bells take the solo part! It is in the endplay that a little drunkenness comes in, like a late night pub night with friends where they start humming or singing together with just about the right amount of beer in them to allow for sweet but soft abandon.

In 'Future', the final song, it again is this mix of relaxedness and urgency. The whistling is almost forced. "Where are my lyrics?", Ackerman might as well be yelling it seems. The lead guitar is far from clean. Elliot Smith on steroids. The ending is even a little estranging, considering what came before.

So, in conclusion. Again a fine album by Gregory Ackerman. Four songs that cry for more. I will have to be patient for that. In the mean time I am certainly enjoying myself with this slightly disconcerting EP.