Cool To Who. Walrus 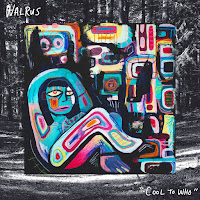 Cool To Who? Well, to me for example. Walrus, a rather uncool bandname for sure, mixes a delightful kind of indie and psychedelic 60s pop rock with the kind of melodies that make my spine tingle in all the right places. Walrus is the equivalent of the soft side of Bettie Serveert after having been ironed over. More sweet than biting and still doing everything right.

Walrus is from Canada, Truro (or Halifax), Nova Scotia to be more exact. Trying to find information on the internet on the band I run into three Walrusses. One progrock band from the late 60s and one from Belgium singing Dutch pop songs. Next to links to the The Beatles song of course.

That last link isn't so far beside the point for this Walrus. (Not knowing the other two bands I can't opine on that account.) The Beatles is a band that I am reminded of often, I notice and especially the 1967 version of the band. Walrus manages to infuse a lot of psychedelic pop and inventive interludes into its music. In my book it is bestowing honour when a band deserves to have the biggest pop band ever mentioned in a review. No, Walrus is not that good, but then which band in this idiom can ever be?

Walrus gives the world an album that mixes alternative pop and rock with deep psychedelic 60s sounds. It does so in the most surprising way when the band manages to mix the best of Bettie Serveert with The Beatles in 'Ballad Of Love (Or Something)'. The two worlds meet and intertwine in a fantastic way.

The album starts in a way though that had me thinking 'do I want to continue listening here?'. Sometimes I don't but then it is an album that is 100% not in my street, so rap, dance or something like that. The rest deserves at a minimum a second chance as it I may be in the wrong frame of mind. Here I just do not like 'Breathe' a lot as it just seems to drag itself along without ever coming to life. The rest that follows all scores on my right side though.

It is the third song, 'Half Smoke', that hybrid of solidness and meandering pop, really kicks off Cool To Who for me. With that soft lingering lick played through the intro and the restart of the song somewhere half way, Walrus starts to make a real impression on me, dragging me further into the album.

The softer side of Walrus comes forward in 'Marcel' where Justin Murphy's voice comes closer to Billy Corgan's, and 'Out For A While'. The soft cadence of the latter song truly mesmerises me as listener. The The Velvet Underground guitar sound of the next song 'Bored To Death' brings the 60s back albeit the harsher, New York City drug addled side of the decade that is. 'Waiting For My Man' kind of rock. "Throw me of a bridge before I start to sing about it" sings Justin Murphy. Too late, lucky for us. With songs like this I would not prefer the bridge to the music, apart for crossing it that is.

It is in 'Anymore', the final song of Cool To Who, that I can't help wondering how well Walrus is familiar with Bettie Serveert's best songs. That leaves me with one remark to make. I could have sworn to be listening to a female singer for almost all of the songs in Cool To Who. Like psych colleagues The Black Angels Walrus had me fooled there.

You can listen to and buy Cool To Who here: