She's The One. The Dogmatics 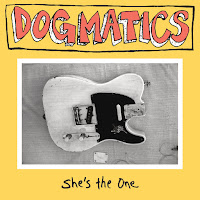 In a way all the records released on Rum Bar Records are nostalgic trips down musical memory lane. The rock and roll, punk, garage rock kind of lane, but even old rockers become nostalgic for music long gone by. The bands of those days are not around any longer or slowly moving into old age.

When The Dogmatics singer Jerry Lehane sings "I love the 70s ... We can keep it alive, We can bring it back" in the second song 'I Love Rock And Roll', he hits the nail on the head. The Dogmatics bring music from long ago in an enthusiastic, totally alive kind of way. The little high sounding organ is the cherry on the song's cake.

She's The One kicks off with a riff bringing back the memory of hearing 'Denise' by Blondie for the first time. It's not the same riff, but there's no mistaking the intent. The fascinating thing is that The Dogmatics is from that era. The voice gives that fact away to those who truly listen. She's The One is the band's first release in over 30 years. That makes it 1986, '87? What was I doing at the time? Certainly not listening to this kind of music. That came much later. I do now and enjoy the rush The Dogmatics' music presents me.

In between that rough edge and throats sore from living long enough The Dogmatics presents some golden punkrock infused with pumped up countryrock and 60s pop melodies. These gentlemen know how to embellish a rock song in the right kind of way. Even Buddy Holly's chord changes can be heard in the title song.

In the new Tarantino movie Paul Revere and the Raiders feature. A lot of tumult, but I like 'I Love Rock And Roll' by The Dogmatics a lot better. It may not be authentic 60s garage rock, the real thing it is. When it all ends with 'Black Plastic Shoes' the conclusion is so simple: I just put on She's The One' once more and then once again. As I said, a hammer, a nail, a head, The Dogmatics knows exactly where the former has to go.

You can listen to and buy She's The One here: