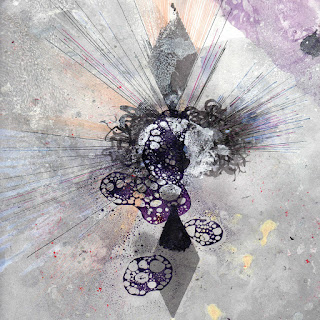 It's art, so I'm leaving a bit more space here for the album cover than usual.

It's less than a year ago Bardo Pond debuted on this blog and already a new album is here (read on: http://wonomagazine.blogspot.nl/2017/03/under-pines-bardo-pond.html) and there is the collaboration album 'Curanderos' from last August as well. Busy musicians they are, the members of Bardo Pond.

If anything, Volume 8 is even more spacy than Under The Pines was. The music in the first two songs are jams in which the band explores some marginal themes without really going anywhere. Explorations in sounds and soundscapes. The drummer vigorously keeps the rhythm going while all the other musicians go off in different directions without losing sight of each other. Because of this it remains interesting to follow the individual instruments in their respective forays. Without me getting overly enthusiastic.

When in the third song the tempo goes down and the acoustic guitar comes out I would have expected a voice to join in soon, but it doesn't. A flute joins the fray that is slowly being stifled by all the experimental sounds going on around it. Not unlike what I wrote in my review on the final song on 'Under The Pines'. A voice does come in later in the song, but also barely audible through the soundscapes.

By then I am wondering what sort of music Bardo Pond makes. It has nothing of the classics in it, so it has not much in common with Progrock. The sounds of the guitars are also far too rough for that. Experimental though it is and instrumental is also something the band is not afraid of. The term post rock comes to mind, but I never understood that one. What is post rock? Either you rock or you don't I'd say. That the music, in part, is instrumental is as far as I'm concerned of no consequence. So Bardo Pond, what are you? Space rock with hints of classic rock? That sounds like a fair description to me.

In the final song Isobel Stollenberger comes out best, voice and flute. Again I'm remembered of Jerney Kaagman, the former singer of Earth & Fire, one of the best symphonic rockbands as far as I'm concerned. Or the one with the best singles ever. 'And I Will' again is a song like a huge drape. It is able to cover everything in the room and still have something left in case of surprises. Slowly but surely the song unwinds. The guitars in the left and right corner giving away their secrets by the note. In the middle the drums, bass and keyboards keep the fundament of the song going. Joined by the flute when not singing. Again Bardo Pond kept the best song for last. Sort of an overwhelming experience listening to Volume 8 is.

That brings me to the title. In my previous review I wrote "'Under The Pines'" is the band's 11th album". So what's with the title of the new one?

You can listen to and buy Volume 8 here: