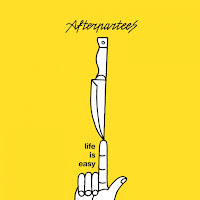 Music without a worry in the world. Life Is Easy, well have I got news for when the lads of Afterpartees get a bit older. So enjoy it while you can, lads. Afterpartees has released its second album and it is of an intrinsic lightness that indeed allows for listening under any circumstance. Just like the bio tells me.

The band's first album released about three years ago was sort of nice but it did not impress me enough to tempt me to write a review. Now that happens to most records, so there's nothing to be ashamed of here. What I do have good memories of is the show the band gave in Leiden at the Record Store Day party in Gebr. De Nobel. Afterpartees knows how to throw some energy into its show and that shows on stage, immediately.

This record is another affair though. The music is lighter and more relaxed. The band holds back and goes for the melody. An elementary one perhaps, but it is in search of the inner melody within its compositions. Just listen what happens to 'Lazy Come, Lazy Go'. There is the organ doing little things. Later the guitars go off and explore many a corner, blowing the song out of its confines and making it so much more interesting to listen to.

This is what Afterpartees has become better at. The band is three years down the road in its development and it shows. Do not expect spectacle, no, expect a band that has left the garage rock, a bit, behind and discovered that there is so much more once the tight confines of this idiom is left behind. The 60s are still very inspiring for sure, but set the opening song 'Ultimate Worries' against the title track and notice the differences. The latter rocks out, the former is the newer style the band developed. And I like both, yet 'Life Is Easy' is easier to warm to. The enthusiasm is so obvious.

This enthusiasm is continues in 'Somewhere'. A golden chorus where the band can go all out in. The inner dynamics of the are superb. It's about this point into the album, I start to notice a shift in the music. The guitars seem to come out more prominent as a standard. Slowly I get the feeling Life Is Easy has gotten off on a wrong start. Not to worry. The approach gives the album some more depth. While a song like 'I Like Your Heart' only heightens the party some more. Even towards the end of the album a really nice song like 'Let's Talk It Over' comes by. With "It's just like heaven to", the last sentence of the song, of the album even, the band all of a sudden gives away an influence that is not directly obvious. See if you can hear it. The balance of Life Is Easy is quite alright as well.

With Life Is Easy Afterpartees sets a nice new step. The album presents some songs to listen to more seriously while at the same time giving the fans some garage rock songs that will definitely grow into live favourites. What more can fans ask for? It's time to find out on some nearby stage soon.

You can listen to 'Life Is Easy' here: