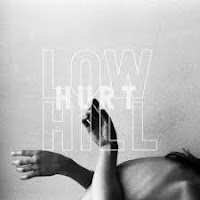 About a year ago, I received an email asking me whether I would consider writing about a debut single. Usually I do not write about one song only and wait for the first regular release. As Laurens Vanhulle asked me nicely and I liked the song, 'Don't', I wrote a review any way in anticipation of more to come and to provide an introduction to this new band/project from Antwerp (read on here: http://wonomagazine.blogspot.nl/2017/03/dont-low-hill.html).

Now early in 2018 the follow up is finally there in the form of the five song EP Hurt. Vanhulle worked with a new producer. The sound of the band has certainly changed with Benjamin Desmet behind the knobs. Low Hill is far more electronic and musically nihilistic. The emptiness in some of the songs is enormous. In other words Hurt puts me on the wrong foot straight away.

The moniker I found accompanying Low Hill remains "Neo Soul". Somehow that rings still true, despite a song like 'Falling' is musically near empty. The voice, voices, modulated or not, and atmospherics set the tone. Through the electronic sound a note of some instrument is able to escape for the barest of moments. The soul remains present in the voice and the handclaps.

Everything goes out the window with 'Liar' though. Synths carry the music totally. Ghost voices roam in the background, moving in and out of the mix. 'Liar' comes close to be what I call "non music". Where whatever the writer used to compose the song has been stripped away after which elements return or in this case perhaps 100% do not. Just atmospherics and deconstructed musical elements and loops.

The EP start with 'This Time', a song that sets the stage for Hurt. The vocals set the stage, followed by the emptiness that defines Hurt. An electronic beat like a sonic boom gives me a flash of fright as it comes so much out of nowhere. 'This Time' sets the stage and makes me aware this is a totally different beast. The xx comes closest in my book of references and triphop acts of 20 years ago. It's also the bridge between 'Don't' and the rest of Hurt. Nowhere is the EP so expressive again.

The title song is the second boldest song so far, because it starts with a firm sound in the form of a few keyboard notes and a soft, electronic drum in the background. Laurens Vanhulle does not want hurt in his life no more, yet sings like he's just dreaming it or is currently so hurt he is beyond energy, even feeling. This combination makes for an impressive song. The Neo Soul moniker could be changed to Neo Jazz is my impression. Of course this music is so modern it has nothing to do with jazz and yet. Somehow the word jazz pops up in my brain regularly listening to Hurt.

The EP ends with 'Down". Unfortunately this electronic drones or minimal music is not something I truly enjoy. Let me leave this here.

With Hurt Low Hill sets the next step in its career. A step that leaves behind the band setting of the first single and enters an electronic world where everything and nothing is possible. Laurens Vanhulle explores both sides of these extremes. In part familiar from his first single, i.e. the atmospherics and treatment of the vocals, but mostly a total new territory. That makes in part for truly interesting and in a silent way exciting music, but also an over the top ending. Intriguing Hurt certainly is.

You can listen to 'Falling' here: