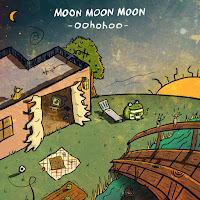 Help! Help! is out for only a few months and Moon Moon Moon surprises the world with another full length album. Like there is no time to waste. And there isn't, I'd say, hearing what I'm hearing. If you have something to share, share it before it's too late. Especially if it's this good.

'Help! Help!', unlike Oohohoo released on Tiny Room Records, met with a favourable reception here on WoNoBloG and the releaseparty found it's way here thanks to .No's review.

So now Oohohoo. Out since 1 June already, I have been able to digest the album over the past few weeks and found that it became more fun to listen to with each new listening session. Although the atmosphere of Moon Moon Moon is instantly recognisable, Oohohoo has definitely more upbeat songs on it. 'Help! Help!' was far more contemplative. The motto Moon Moon Moon gives on its Bandcamp page for Oohohoo, where this beautiful piece of work can be bought from €1 upwards, is self-explanatory: "Please drink lemonade with this album and take it with you on vacation". In other words, substitute the lemonade for your drink of choice and "a splendid time is guaranteed for all", to quote the lyrics of one of the songs of an album that celebrated its 50th birthday on the date of release of Oohohoo. There are no coincidences, people!

In fact that splendid time is guaranteed on Oohohoo. That starts with people who enjoy the best songs released by Bright Eyes. I'm reminded of them most of the time. That has to do with the voice of singer (and all else) Mark Lohmann. The musical idiom certainly is not unlike, it is his voice that could fool me easily. There's a significant difference though. For most of the time I like the songs of Moon Moon Moon better, than the oft dismal songs of Bright Eyes. The mood of Moon Moon Moon sits a lot better with me. My song of point being 'Room'. A great song that could well be the essence of Lohmann's life, working on his art in his room, waiting for his "real world skills" to arrive by an act of magic one day. The song is so upbeat, so strong and in fact is a strange but beautiful love song. At the same time the song has so much humour in it and self-knowledge. One of the pure gems on Oohohoo. Which also holds the title "song". What is he doing there? Recording himself outside of his house? Yes. Standing beneath the window of the person he's singing about in 'Room'? It's nice to fantasize here.

The music I am hearing is all composed and recorded in Lohmann's home, "bedroom recordings" I read somewhere. Be that as it may, I can't find much at fault with this recording. In fact several of the songs give me real joy. 'Leaking Rowboat II' is such a fantastic song. It simply twirls. A lot happens here and it is all in the right place. So much going on and a few simple piano notes end it all, while the twirling goes on around them.

Not all songs necessarily go in a linear line from A to B. Expect them to visit A1, C or R8. Some unexpected twist may be there, but they all work. Even if they surprise at the start. The song takes them up and continues incorporating the new theme. This way Oohohoo keeps me on my toes, alert and surprised. Expect some soundscapes or sounds in between, paving the way to the next song. Expect something very busy to go back to a guitar only, before "all" return.

Oohohoo is the second album by Moon Moon Moon I've run into and again I'm impressed. From that bedroom in Heerhugowaad some very interesting music is pouring forth in a tremendous tempo. If Lohmann continues in this tempo I can review at least one more album this year.

You can listen to and buy Oohohoo here: