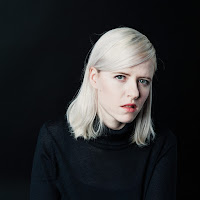 As promised during her show in the Tolhuistuin the new EP of Amber Arcades sees the light of day. Having reviewed the band before with ever more enthusiastic words, expectations for the new release are higher than ever. Two songs were already available on Spotify and came by live. They promised a lot for Cannonball.

The EP is a five song one. It is extremely simple to review it. Amber Arcades delivers in the standard that I have come to expect from the band. So what I am hearing is new wave songs, with a light psychedelic edge to them and a pop element that makes the sun shine on the gloomiest of days.

Annelotte de Graaf seems to have found an extra confidence in her voice. A voice that is more dominant over the music. The absolute example of this is 'It Changes', a track so good that it is challenging 'Fading Lines' as my favourite track by Amber Arcades. The chorus is beyond heavenly. What ever it is that comes beyond heaven, it must involve songs like 'It Changes'. It just doesn't come any better. The chorus is so upbeat, happy and full of anticipation for what comes after, that it simply makes me feel so good. And that is the sort of state of mind that I like music to bring me in every once in a while. Paradoxically the saddest of songs can have that effect too.

Cannonball doesn't remain this upbeat. But let me start at the beginning. 'Which Will' already shows the effect that 'It Changes' reaches. The lightness of tone of the sound and the song as a whole, show the openness that the cover also shows. Many a picture of Annelotte de Graaf hides her face. Here we see her face and the music has the same openness. The sound is clear, the drums a clear sounding driver for the bunch of guitars that are played all over the place. Nothing muddies over, all can be followed separately with ease.

Just listen how 'It Changes' starts with such an intent. The beat drives the song forward relentlessly. A point needs scoring. The beat remains there until the very last point is scored by Amber Arcades, it must be "douze".

The tempo goes down in 'Wouldn't Even Know' in which Amber Arcades is joined by vocalist Bill Ryder-Jones in the former decade singer of The Coral. The song takes the exalted mood down to a more earthlike world. The song is soft and much more modest. Subtle organ and guitar lead us towards the vocal. When the second guitar and the bass enter, the foundation is laid for the melancholy vocal. The 60s twist in the song is evident. It could have been sung by French female singers at the time.

The tempo nearly stops in the fourth song. 'Can't Say That I Tried' is another song where a sixties influence shows through. This time the guitar and the keyboard provide a psychedelic vibe to the song. The slow pace gives me the impression that we are walking towards an unknown distance, no idea where we are heading, except that we have to walk for as long as it takes.

The tempo remains slow in the last song, 'Cannonball'. The sound opens up again though. The guitars are clear, the percussion is not though. It sounds muffled, just like the bass does. Half demo, half studio? The lead guitar floats over it all, leading us back to the star of Cannonball, Annelotte de Graaf. She shows a few different faces of herself on this five song EP, showing the versatility and progress that I hope for. Next to that I'm hoping for two more things. 1) That she keeps releasing new songs in this tempo and 2) keeps up the upward line she is showing here. Cannonball is a fine record and that is Amber Arcades' fourth in a row.

You can listen to 'It Changes' here: