"John is in the BASEMENT", as we know and we know what he's doing there and where Bob Dylan was and what he was thinking at the same time.The still on the front of Greil Markus' book on The Basement Tapes totally explains itself.

When in the early summer of 1966 Bob Dylan fell from his motorcycle (or not), the world shifted just a little. It is one of that sort of incidents after which something changed, an incident that can be pinpointed to as the moment of change. Dylan who had been battling his audiences who wanted him in his old, acoustic, place as the voice of his generation, while he was busy changing the face of popular and rock music. While he was working on the career he was about to have. Dylan is like Picasso, I always tend to think. His works can be defined into periods, with change as soon as he's bored or said enough and then reinvents himself, baffling all those left behind with their expectations. Often speechless or even in anger, as the man does not do what is expected of him.

In the summer of 1966 Dylan disappeared from the face of the earth, the public side of it. Just like The Beatles did in that same summer. After his recuperation he invited his touring band to come to where he was residing in the Catskills, upstate New York, somewhere around the later very famous Woodstock. There they started a recording process that all in all lasted for almost a year. Music that at the time did not lead to a single record being released. Dylan's late 1967 record had nothing to do with the basement recordings (as they didn't with his success album 'Blonde On Blonde' from 1966).

The sessions led to some hits for other artists and to a few songs on The Band's debut album 'Music From Big Pink', where the basement was situated in. So here we have recording sessions producing dozens of songs, old folk song covers by artist from 'Anthology of American Folk Music' and others and loads of Dylan originals. Some of which are hardly more that snippets full of laughter, never returned to.

That is the physical output. The sessions did something else to. According to Greil Marcus the author of this book, the sessions more or less started the music we now call (alt.)Americana. It started the career of The Band, who found its own voice and songwriting talent in the process, combining the past with the present. And, it set Dylan on a different path, allowing folk and country (back) into his version of rock and pop, mixing everything. Although the extremely stern 'John Wesley Harding' still is a hard album to stomach nearly 50 years later.

In his story trying to tie 'The Basement Tapes' to American (musical) history Greil Markus sometimes goes straight over my head. I just lack some fundamental knowledge that seems to be necessary to really follow him. By creating mythological worlds, the "invisible republic", "Smithville" and "Kill Devil Hill", where he lets loose the songs and personae singing and/or within the songs, a world is created in which to explain the lyrics to the songs. All these worlds converge in that basement and come out as something different, something new but of an undefinable age. Some of the songs are downright dangerous, impossible to escape with your life from, Markus suggests.

In other parts he brings the 1920s singer Dock Boggs alive with his description of the man, his life, his stories, as taped by Mike Seeger, and the times in the backwaters of Virginia and Kentucky. Listening to Boggs' music for the first time on Spotify, yes the man is on there, it is still not difficult to hear the impact the man and his banjo may have had at the time. The voice rough, un-trained, raspy, nasal. And who does that make me think of? 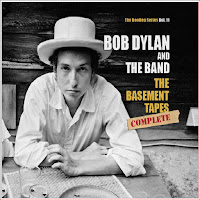 The Basement Tapes I have written on after the release of the box set containing it all or so they claim. (Read more here: http://wonomagazine.blogspot.nl/2014/11/the-basement-tapes-complete-bootleg.html) The book is certainly an aid to understand what went on at the time a bit better. Greil Marcus may sound a bit pompous here and there and flying high as a bird, things do come together. Showing how important these recording from 1967 up to early 1968 were and what great songs came from them.

Because that it did. Released as hits for others, Manfred Mann's 'Mighty Quinn' is in my possession for many decades and 'This Wheel's On Fire' by Julie Driscoll and Brian Auger's Trinity being one of my favourite songs of the era, and on loads of illegal records that somehow found their way from copies of the tapes in the possession of The Band's organist Garth Hudson, who recorded the whole process. It wasn't until 1975 that a double album was released from the tapes and through the years more and more came out, until in 2014 most of the tapes found their way to a cd box release.

In the U.S. religion has always embattled wordly expressions, Markus writes, going all the way back to the first settlers, often religious persecuted groups off to a new start in a new world. This battle goes on right up to today. Dylan & The Band made the worldly songs win in their day, as the singers and their cultural heritage they tapped into were all but dead in 1975. That makes me point out that we are coming to such a tipping point again in 2017. The generation that led the world into Americana is about to leave this world. Three of The Band's five members are no longer among us. Tribute bands are starting to draw large audiences as the originals are no longer there to play for us. That leaves me with one question: is a new sort of basement tapes gathering of musicians necessary? There's one major difference with 1967? Dock Boggs is on Spotify for everyone to hear, let alone what came after him. That is not the same as preserving that voice, that culture and passing the flame to a next generation. And that is exactly what Bob Dylan and his band, later The Band, did during these recording sessions, bundling energy and passing the flame.