When On Fire. Christine Owman 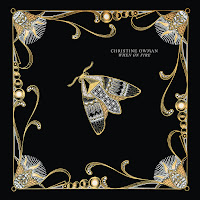 Oh, sweet mystery! Is this the soundtrack for the upcoming 'Twin Peaks' series, part 3. 'Fire Walk With Me' is all around. 'Never Thought'? Where's Angelo Badalamenti? He must have been around in the studio when Christine Owman recorded this song. All that hides in the nefarious woods of north-west Washington creeps out of every sound of the song.

Christine Owman is someone who had music in her life, in her veins, in her being from the earliest possible age and started playing music when most girls play with their dolls. This resulted in a career in music in a very DIY way, until she signed with Glitterhouse Records to release her second album, 'Little Beast' in 2013. Three years later album number three was released, now picked up me. Malmö has a new hero as far as I'm concerned, forget Zlatan, enter Owman.

When On Fire is an album that certainly fits in categories, but most of all it is the strength of the music that sets it apart from those other albums and musicians. What is going on here is as brooding as the dark cover and as beautiful and menacing as the beautiful insects depicted on the cover. These insects live by night and are attracted to the light. The music is as dark as the night yet searching for the flame. Revealing it every once and again before covering up where ever we are in lest we'd become overjoyed. At night most people sleep and dream. Dreamy this music is, although not always necessarily of the pleasant variety.

In short Christine Owman presents us listeners with beautiful soundscapes, atmospherics in the dark, to quote Tom Robinson. Her cello meanders moodily through the songs, the bedrock of some songs even. A light sounding keyboard elevates the mood slightly in 'From The Dusk'.

Lana del Rey is one of the reference points. The music is very much different. It is in the melancholy mood and the fleeting way of singing where the two singers touch. The mystery that combination creates is where both are able to mesmerise their listeners. Add the spaciousness in and emptiness of the guitarnotes of The xx and Owman does play 'Twin Peaks' in 'Never Thought'.

With the cello being Christine Owman's main instrument, it isn't hard to imagine that When On Fire is a different album from most in the alternative rock segment of music. The mood is different. Take the centre musical motif of 'Bridges'. The combination of just a few notes are carried out throughout the whole song, giving it a dark and brooding atmosphere, over which the dreamlike voice of Christine Owman hovers. Like Little Red Riding Hood on her way to her grandmother, a basket with some food on her little arm, walking into the deep, dark, eternal forest. Singing with Mark Lanegan in the title track, it's as if the girl and the wolf do a duet first. It is exactly this mix of music where the comparison with Lana del Rey is most noticeably. That mood where innocence and beauty mixes with lurid badness, changing both forever. 'That Low'? Draw your own conclusion after listening.

Now I have never really contemplated buying Del Rey's albums on vinyl. I do know though who enters high on my wishlist to make that investment in. When On Fire is mysterious, dark and yet dreamy like female artists sound like in the 10s. Warpaint, Agnes Obel, Jenn Grant's, upcoming album, Christine Owman matches that sound in the vocals and then the music kicks in. Simply superior to all those other albums.

You can listen to 'When On Fire' here: