The World Is A Broken Toy. MJT 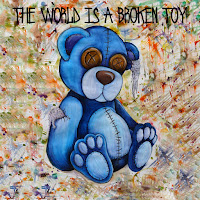 And thus the world has become. The good news is of course that most toys can be repaired or patched up and given a second lease on life. Let's hope that the same goes for the world.

About a year ago I reviewed the debut EP of MJT, 'Nightmares And Daydreams', a great rocking EP by a trio from NYC, that begged for more and that more is finally here.

On The World Is A Broken Toy, MJT takes the listener on a rocking trip once again. With the energy of Lenny Kravitz as I haven't heard from that artist since his single 'Are You Gonna Go My Way'. With Kravitz one of the main influences on MJT is mentioned if we look at the rock side of the equation. The soul and funk of Kravitz is less obviously within sight. The tempo is up until we reach the second half of this EP when MJT presents us with ballads.

It's a strong sound and rock song with which The World Is A Broken Toy opens. 'Revolution', rocks out with loud, overdubbed guitars and a fiery Hammond organ, The drums pound on in the background with some strong fills. Whether the world needs a revolution right now or that it may be better if some level-headed people were more in control is matter of debate and preference. We might be watching a revolution of some sort in the U.S. on a daily basis after all. Fact is that 'Revolution' is the kind of song that every rockband dreams of to open its record with. A loud riff, with great accents, with the drum hitting all sorts of accents of its own, playing off the guitar riff. When the organ kicks in screaming, rockers know that this will not go wrong. And it doesn't. What a great rock song. DeWolff, Living Colour, Lenny Kravitz, Deep Purple it's all here and much more. 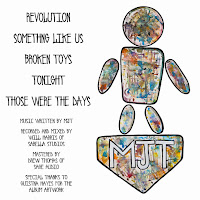 The rock feel is kept up when we progress into the EP. Now MJT once upon a time stood for Michael Jazz Trio, when the Godfrey brothers, Matt, David and Jo Jo, started out playing on Long Island. Is there nothing left from the band's starting days. Well, a little. Listen to 'Something Like Us'. It has a strong rock background, yet all sorts of influences shine through when I start listening beyond the obvious. First I notice a psychedelic vibe floating around. Beyond that the song has a very difficult texture. It is not as if every band in town will play this song in one go. Complex rhythm changes, stops and starts, lots of dynamics. Lenny Kravitz is there, certainly, but so is Living Colour, elements of progrock, Yes, all mixed into 4"39. The drumming has things I remember from Bill Bruford's solo record of circa 1980. MJT is rolling some musical muscle here and gets away with it easily. Where the famous progrock bands took 20 minutes to make their point, here it is in just over four and a half. Point made. Just wow.

'Broken Toys' is also a rock song, but much more dreamy. The pedal is of the gas. The urgency left behind, for part of the song. It has a great build up though. The music comes closer to Linkin Park, without the rap parts and keeps the prog elements without the near endless elaborations and explorations. Parts of the songs just seem to be floating. The mesmerising is rudely interrupted by the loud guitars and the pounding on the drums when MJT returns to its rock basis.

Not all is totally good on the EP though. The ballad, 'Tonight', feels somewhat strained I have to say. It seems not to have that assured delivery the other songs have. It is more on effect than an original idea is my impression. This is mostly in the vocal melody as I notice what is going on underneath is nice and varied. When the organ comes in e.g. is a part I really like. In 'Those Were The Days' the energy goes down does even more. An acoustic guitar takes over. The name Kravitz comes to mind again but also Yes in one of that bands ballads like 'Yesterday And Today', e.g. I am glad to return to the loud riffing at the start though when 'Those Were The Days' is over. That is where MJT is at its best, I have to mention.

MJT has come up with a second EP that I only could hope for. It's time for a full length album and a first sort of breakthrough. What I'm hearing holds everything rock lovers crave for. So go out and listen, now!

You can listen to the promo here: