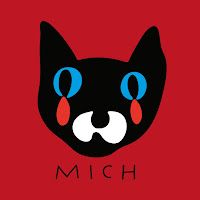 Another band from NL on these pages? Yes and its from Amsterdam as well. Don't ask how to pronounce the band's name, If I'm to believe the band itself it's more like a curse in comic books. You know the "!@#$%" sort of thing and then even more difficult. For the rest I can't tell you a lot more.

Googling helps some in finding out more. Baby Bosma played in Aus Raux, collaborated in Coevorduh, plays bass and sings. Mick Johan is writer and drummer. Piet Parra is an artist and gitarist. Rimer London is a DJ and keyboard player. A band with 3/4 aliases. Live Sofie Winterson plays bass, while Piet Parra is not to be found on stage. So it is fair to say, also taking the background of the musicians into count, that Mich is more a project than a band.

Mich is a serious album. Everything around the sound and approach shows that. At the same time it is a thing on the side for most involved. So the first two sentences can be seen as a compliment. Musically the band plays in an idiom of new wave and early 80s doom rock. The Cure, Joy Division and a host of bands I hated at the time. Too dark for me. A few years later Robert Smith lookalikes took over dancefloors. Mind, only when their kind of song was played. For the rest of the evening they were collectively shoe, pardon me, bootgazing.

The sound of The Cure is everywhere. The dry sounding drums that have been given the illusion of spaciousness. The guitar playing fast notes with some delay on them. A pumping bass in the background. The singing is desolate. Not a lot of emotions are to be found in Mich. It is the mix of the downbeat singing and the lighter sound of the lead guitar notes and the keyboard that is making rays of light permeate the darkness. It is exactly that mix that makes Mich an interesting album to listen to. And, most of all not from 1981-82-83-84.

No, I can't write that Mich is revolutionary. Nothing new is happening here, there are no clever additions to a long existing genre. Far from. What seems to be going on here, is a group of friends or good acquaintances having fun and playing the music they love. So in a way like that great sixties pop pastiche, of what 15 years ago?, by Swag, called 'Catchall'. That seems to be going on on Mich.

Meaning, that the bandmembers take this music very seriously and have come up with a fun album. Every sound is in its place and as authentic as it comes, the beats are right and the mood is like the bomb is going to drop any moment. This is what 80s doom should sound like in 2017. We are moving into darker times, so who knows, Mich might be the right band at the right time. For now let's dance to what we have and not to what we may get.