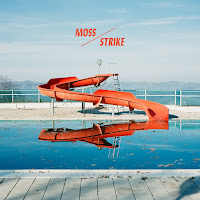 Moss is an old hand on these pages and in the magazine that preceded them. Search and you will find reviews of the previous two albums, 'Ornaments' (2012) and 'We Both Know The Rest is Noise' (2014) and a show in 'Het Paard van Troje'.

Come 2017 things have changed a little. Bass player Koen van der Wardt has decided to leave the band and pursue his own career under the name Klangstof and released his own album in the fall of 2016, 'Close Eyes To Exit'.

Does it matter a lot? No, the sound is recognisable. Perhaps not from thousands, but certainly dozens. The dreamy element that the voice of singer Marien Dorleijn brings to the whole is there, the alternative mid tempo rock with fiery outbursts is also well in place. So much so that my introduction to Strike followed the pattern that most new albums by bands I like and know well encounter: a disappointment.

Then either of two things happen: either I keep disliking the album as a real disappointment or the album finds its way into my life and graces it with its presence. Strike has followed the second track and thus you find me writing on it. Giving up straight away is not an option when I like a band. (Even that last album of Lou Reed with Metallica was given a serious shot by me.) Strike won out.

Strike has Moss following the path that the band entered with 'We Both Know The Rest is Noise'. More up-tempo, alternative rock with hints of 60s pop, e.g. The Byrds, in combination with atmospheric lead guitars and moody stuff in the background here and there from synths or keyboards. It's a path I take my musical Moss hikes on regularly. It is that path of pleasant recognition that opens Strike, with a few up-tempo songs that fulfill my expectations and Moss desires.

When the band takes a step back in 'It's So Hard To Keep A Secret', the dreamy quality takes over totally. At first near bare. Drums, bass and a synth playing a few notes. Slowly the song is built up and flashed out. More and more guitars enter the mix in the glorious chorus. It isn't exactly a ballad, but in the Moss universe it is. There are so many little aside sounds to follow, stacked on top of each other, that the song is glorious indeed.

An Air bass, the plopping kind, enters 'Ghosts' giving the album a totally different flavour once again. The fleeting guitar noise fills the whole breadth of the mix, giving the idea of a monumental sound, while 'Ghosts' is a small song. Enter an acoustic guitar that changes the song yet again. I start noticing how many ideas were packed into the songs, how varied Strike is, where at first I thought to hear just another Moss album. More and more Strike becomes the fifth album of Moss, asserting its individual right to exist in the oeuvre.

The title song cuts out nearly all else while Marien Dorleijn is "walking a tightrope". All mood and vocal melody. I'm happy the bandsound kicks in again and that the tempo goes up a bit again also in 'Don't Look Me In The Eyes'. The song has an 80s new wave feel. It's a square song, with a round interlude. The only way I can describe what's going on here. 'Me Me Me' delves into that era also with a Gary Newman synth sound, tight drumming by Finn Kruyning creating a Fischer-Z atmosphere. A song that just grows and grows.

Today it's still more than two months before the band gets to play Paradiso with Amber Arcades. So far away. I can't wait to hear this music live though. All hesitations are put aside. With Strike Moss may have delivered an ideal follow up album that I will play for quite a while.

You can listen to 'My Decision' here: