IX. ... And They Will Know Us By The Trail Of Dead 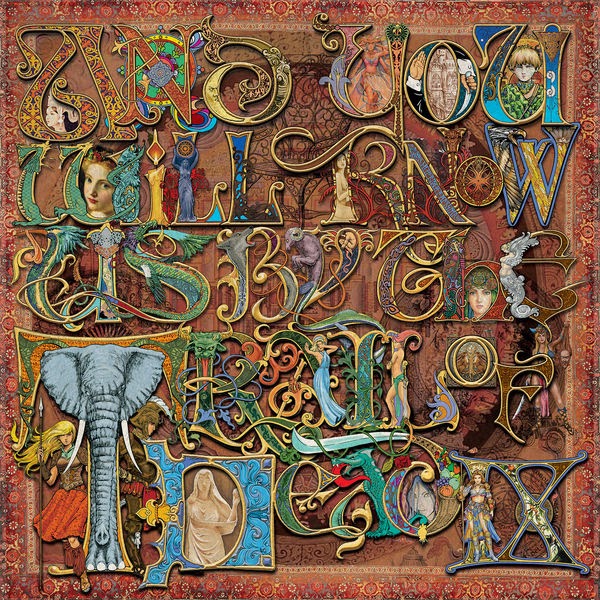 As busy, unstructured and muddily colourful the album art is, so structured are the songs on IX. Since somewhere at the beginning of the millennium I am following Trail of Dead, even wrote a short, short story on the band's name in a WoNo Magazine circa 10 years ago. Time flies. With IX Trail of Dead made another album that makes a difference. My favourite album so far was 'The century of self' (2009), but that may change some time soon.

IX, yes the band's 9th album, is a beast of a rocker. Full, all emerging and with not a lot held back by Trail of Dead. The band fills up the whole of the sound spectrum. Nothing left to guess at. All holes are filled with one massive sound or another. The drums are hit hard by whoever is playing them. The bass pumps up the songs. The rhythm guitars and synths fill up the rest over which is sung. Lead notes and instruments are laid on top of all that.

Core members of Trail of Dead are Conrad Keely and Jason Reece, who alter between vocals, guitars and drums, with some keyboards a well played by Keely, Autry Fulbright II on bass and Jamie Miller on drums and guitar make up the band. As you'll be able to guess, there are many ex-members to this band. Keely and Reece seem to be a very stable factor amongst themselves. Together they cook up a storm. I don't know if you were ever really hit by a wave and for a couple of seconds lost all contact with the seabed, being knocked about by the force of the wave? Well this is the impact of IX. Put on a headset and you're sonically knocked about a lot. With at the exact right moments some lenience, that allows you to come up for air, before you're being sucked in again by the force of Trail of Dead.

'Lie without a liar' is such a forceful song. It just keeps pounding in all the right ways when talking hardrock. 'The ghost within' allows for a few moments of rest, tension slowly building, with the release coming at the "Now you want to let go" moment. The right lyric at the right moment if ever there was one.

No matter how different the two bands are, I can't escape thinking this is the sort of album U2 might have wanted to make in 2014. Urgent, making a difference and forceful. 'Lost in the grand scheme', however much a Trail of Dead song, is all that is missing on 'Songs of innocence'. The rhythm guitar sound overall is darker, but it isn't difficult to imagine The Edge playing here, where the lead guitar comes close enough.

'The dragonfly queen' is another such example of how good Trail of Dead is. This little more pop and a tat less hardrock. The drums are just as loud, driving the song onwards, the keyboards and vocal melody make it a pop song as do the lead guitar melodies. It is the variation in songs from the loud opening trio with the middle section that make IX an irresistible album.

And so I have just defined for you why I like Trail of Dead so much more than many a metal/hardrock/progrock band. To specify some more. Trail of Dead is so much better in melody, build up, dynamics and variation. It lets go in time, it dares to go full out, finds the softer melody in loudness, does not shy away from a good pop moment and is to the point when a song demands it. IX holds all that and more. The storm continues towards the end with another couple of stark rockers. And the almost classical piece 'Like Summer Tempests Came His Tears' comes by. Violins all over the place, until the band joins and follows the lead piano. Psychedelia meets the classics and Conrad Keely shows that the classical piano training in his youth wasn't for nothing. With a final rocker, 'Sound of the silk', Trail of Dead ends off the storm called IX.

... And You Will Know Us By The Trail Of Dead with IX has released a fine album. Perhaps its best. Time will tell. I played 'The century of self' for years. It is up to IX to prove itself.

You can listen to 'The ghost within' here: