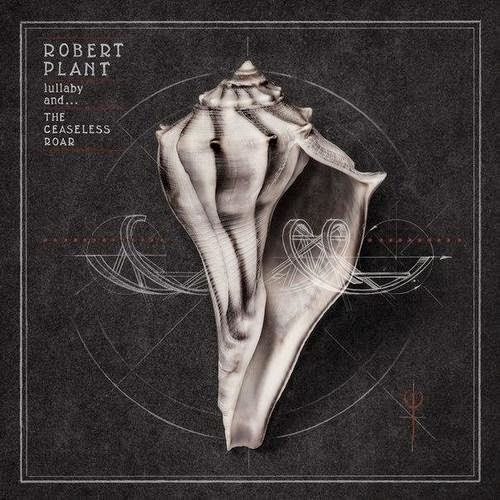 With all eyes on Led Zeppelin's reissues of the first three albums and the rest to follow soon and Jimmy Page crying wolf that Robert Plant doesn't want to take the old dinosaur back on the road, the world is presented with the (well, at least one) reason why Plant is not interested. Around the world his new cd is hailed as his best solo record to date. Mind, that is after a solo career of 33 years, at the age of 66. That's no mean feat. Would I like to see Led Zep? Sure, having missed them in the 70s. Would it add to the Plant & Page show in the 90s and the movie last year? Who knows. Let's for now concentrate on Lullaby ... and the ceaseless roar.

Robert Plant is a singer, so let us start there. He is singing fantastic on Lullaby ... There simply is no denying there. His voice has aged, but hasn't altered. Instantly recognisable. It's the antics that he has left behind. The young exuberance and passionate, testosterone fuelled cries of early manhood are no longer necessary to make an impression. Leave that to the quality of his singing.

The second thing that gets noticed, is the modern electronic percussive techniques that are woven into the songs. Not so much to make them sound more modern, no, e.g. it lends 'Pocketful of golden' something mysterious. Especially when the eastern melody kicks in as well. Add the 70s synth sound, think Tubeway Army on a mellotron and with the mystical singing an extremely interesting and mysterious song is presented.

It is this combination of folk influences, eastern melodies and eastern sounds together with Plant's voice that make Lullaby ... instantly likeable. So if you ask me, I perfectly understand why Plant worked on Lullaby ... instead of rehearsing his past and taking it across the world for two years. There may not be so much time left to loose. One never knows. He still has this inside of him that needs to be let out. That may be the large difference with Jimmy Page who seems to be looking at the world from behind his geraniums at home.

The album was made with his new band, The Sensational Space Shifters, who get all credits in the songwriting, making Lullaby ... a true band offer. This band is very diverse as all instruments are played by the band. A long list of exotic instruments are mentioned: bendirs, djembe, tehardant, tabal, kologo, ritti, omnichord,to name a few. Or Fulani vocals, although a comma may have been skipped? The beautiful Irish sounding vocals of Julie Murphy at the end of 'Embrace another fall' gives the song a totally different edge all of a sudden, completely out of the blue.

Don't expect any links to Led Zeppelin other that Robert Plant's voice and some folk influences on Lullaby ... This album is a totally different beast. Something to listen to closely, secluded from the world and fully concentrated. An album that has to make a connection to you to speak in volumes. Right at that point you're allowed to dream away on the music. Not one minute before. In other words it will or probably will never come through to you. A song like 'A stolen kiss' is just too subtle, for any other attitude towards it. All atmosphere with only a voice and piano to carry you through the ethereal sounds around them. The next song is 'Somebody there'. If I have to name a song that would qualify for a new Led Zep album that might never come, it is this one. It comes closest, the most poppiest also with its easy to sing along with chorus. On the other hand it will also qualify for a new Oasis album.

Robert Plant has managed to capture a rare mood on his new record. Something out of time completely, while sounding modern, ageless. He sings simply fantastic and has made an album that is special. There's no other word for it. With 'House of love' he's caught shear beauty on record. With the opening songs mysticism and mystery. A rare combination of worlds are captured in song. Yes, like 'Kashmir' did, but subtle and in many ways. Wiser, older, not necessarily better, but certainly successfully different.

When I'm just listening to Lullaby ... the album is too long and a bit boring. (Allow to put in one thing negative, o.k.?) When I take my time and slow down to the rhythm of this album, I'm totally mesmerised and taken away from the here and now. How many albums do you know are able to do that? I can name a few, but Lullaby ... and the ceaseless roar is one of them. Great album by a great, classic artist who has re-invented himself again. Robert Plant, my hat is off for you.

You can listen to 'Rainbow' here: