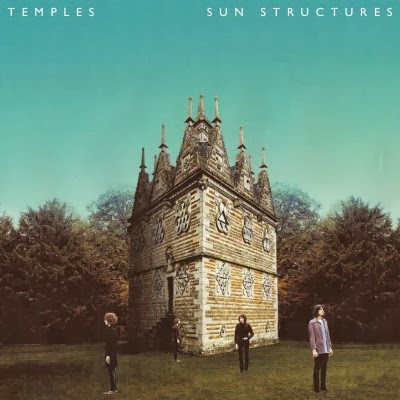 After all the clamour in the past few weeks over Sun structures, I had the fright of my life hearing the first minute of the album: Oh my God, all good riffs "Last train to Clarksville" style with an "Eight miles high" sound have run out! What a forced effort at playing and creating a chord that way. It nearly turned me totally off from Sun structures. I'm glad it didn't. All the clamour may well be made at the right time and at the right album.

Temples is a new U.K. band from Kettering and is around only since 2012. James Edward Bagshaw sings and plays lead guitar, Edison Warmsley plays bass and are the founders of the band. They started off as a duo recording songs at home, which led to its first single 'Shelter song' only six months after starting the band in November 2012. Not long after they recruited Sam Toms on drums (appropriate name for a drummer) and Adam Smith who plays keyboards and rhythm guitar. Together they are responsible for yet another psychedelic retro sixties rock band sound. What is that attracts so many kids to this specific and mainly old music? The cover is even a nod to 'Who's next', The Who's fantastic 1971 rock album. There are a few odd details missing though.

Temples strives for perfect pop songs. Once they are in place, it goes about estranging them from the primary source. Sounds come in, sounds are treated to make them sound warbled, phased and very unnatural. Just like bands like The 13th Floor Elevators, Syd Barrett's Pink Floyd and Frank Zappa & The Mothers of Invention set standards for in 1966. This music is distinct from better known bands like The Beatles, The Rolling Stones and Traffic, who also played with psychedelics for a short period of time before going back to what they were good at. They are names that come to mind though listening to Sun structures.

The hard part is to distinguish between the quality of the songs and the quality or better authenticity of the effects smeared out over the songs. The latter is perfectly allright. Many a psychedelic sound comes out of the keyboards, several songs have melodies reminding of the era and the style of singing is instantly recognisable as such. So let's take a closer look at the quality of the songs. The songs on Sun structures are alive. They are not an academic study into 1966-1967 songs like 'Cabinet of curiosities' of Jacco Gardner. Next to that different styles are used. More pop oriented songs and harder driven songs. 'Shelter song' and 'Sun structures' that open the album are a good example of this. The latter even has several changes of atmosphere within the song that give it a great quality impulse. 'Sand dance' at the end of Sun structures has some heavy guitar notes in there, that are also very attractive. From the 60s the band steps into the early 70s just as easy with typical T. Rex rhythms.

The number of references possible are too numerous to mention. (There is even a clear reference to Ekseption in 'The golden throne'.) Of course this says something about originality, which is totally lacking, but then it comes down to what Temples does with these influences in what it does. Sun structures is an enthusiastic album, several songs just splatter out of the boxes. Mind not all, but enough. Sun structures is a potent album, it has body and character. Which means it gets on my good side. Which is a feat as 1966 psych-music is not my most favourite.


I have to admit that my tolerance for yet another band in this segment of music is being tested. Temples managed to pass that by and found its way not only into my cd player and iPod, but also into rotation. Temples is a promise for the future. It may prove interesting to follow where the band will go from here, as this retro 60s style will not be it for ever.

You can listen to 'Keep in the dark' here.