Wig out at jagbags. Stephen Malkmus & the Jicks 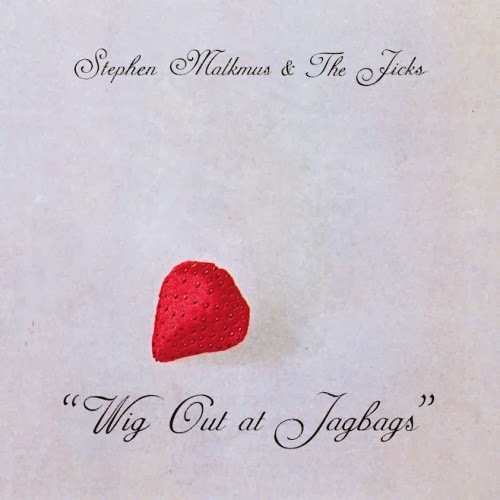 What a title. No clue what it means. It sounds nice though. Stephen Malkmus is in the music business for over 20 years in 2014. First in Pavement and is now for 13 years following his path as a solo artist with his band The Jicks. Maybe you're surprised, but I haven't one single album of either in my collection. I just didn't like Pavement at all in the 90s. Despite all the rave reviews, it had nothing for me. Too unclear, too much "hidden" songs, too wobbly. Hence I never followed Malkmus when he went solo as well. So why now when The Jicks released their sixth album? I have no clue, it just means that I like Wig out at jagbags.

From what I remember of listening to Pavement a long time ago, is the slacker sort of attitude in the music. This is certainly discernible in Wig out at jagbags too. It does not hinder me in the least here. Most songs are firm, straight rhythms and played well. There may be some estranging elements in songs, the solo in 'Shibboleth' e.g. (and in the title?), but it's o.k. It is just part of a good song. There is hint in the music also that makes my liking of this album a lot more understandable. Several songs have The Kinks/Ray Davies signed all over them. It's in the way of singing mostly, as the music is to rock oriented to sound like The Kinks at first sight, but taking in mind albums like 'Low budget' we are getting closer. There is this soft form of irony over the whole album. 'We are making great music here, but all in good fun and taste, but see if you can spot which colleagues we play around with'. Something like that. And I like it.

Another thing that I noticed, is that there is a great diversity in songs on Wig out at jagbags. The slow song 'J smoov' has this wonderful accents from a keyboard and this trombone solo that sounds like it is played by someone who plays all the right notes; for the very first time. Where the trumpet in the background is so smoov. 'J smoov' has a beautiful tension arch. From slow, totally laidback to this full band playing is just very well done. Opener 'Planetary motion' has some light Zappa elements engrained into the song. 'Rumble at the rainbow' tries to be a punkrock song, but isn't, as it isn't a reggae tune either. 'Freak out' era Zappa returns in the final song 'Surreal teenagers'. Totally freaky and psychedelic. The somewhat weird melodies that make up a song any way. The full rock out finale is not 'Freak out' in any way, but fits the song and the nod to 1967. If you listen closely it is possible to sing "Hungry freaks, daddy" at two points in the song. Fun little element. What about this: "We lived on Tennyson and venison and the Greatful Dead". Well found this rhyme and lyric, in which 'You are want you is" is turned around as well.

Price tune is 'Chartjunk' as far as I'm concerned. Strangely enough it reminds me of Chicago's 'Feeling stronger every day'. It has nothing to do with it and still it does. It has elements that are similar. The rhythm, the guitar solo, the horns going full out. And this level is kept up in the ballad 'Independent street'. These elementary played songs is The Jicks down to its basis. Guitar, bass, drums and Malkmus' voice that has trouble to keep the melody, lending the song a certain edge. Beautiful none the same.

Who are The Jicks? In 2014 they are these three people: Joanna Boame is a member from the beginning on bass, Jake Morris is on drums since 2010 and Mike Clark who plays keyboard and guitar since 2001.

In short, Wig out at jagbags is a great indierock album. A lot of different things are going on, with enough levels to keep discovering new little things in the songs to keep listening to the album interesting. Yes, I'm surprised and I love surprises like these.