Sequel to the prequel. Babyshambles 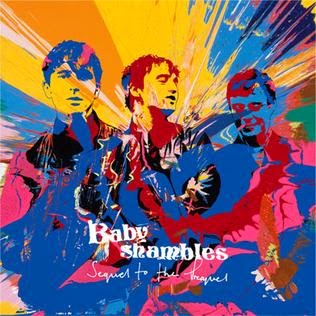 The club of 27 has been proven to be totally random, since Peter Doherty is still around. Perhaps only because in the end he's a good boy and listened to his mum. O.k., enough of that. It's silly. Let's focus on the music on the latest Babyshambles album.

To be honest, I had lost a bit track of Doherty's doings after the split with Carl Barat and the other two guys that made up The Libertines, that bands that coupled brilliance with rehashing. All the news around him distracted me so much that I simply filed him away under been there done that. Until my ear fell on Sequel to the prequel that is. To be exact 'Nothing comes to nothing'. That same spunky slurring, that seeming to be too lazy, drunk or retarded to pronounce a sentence in a correct way and at the same time a hint of brilliance. The kind of singing that I recognized instantly and like so much about The Libertines. O.k., it's time to pay attention and that I did.

That I lost track isn't so strange, as Sequel to the prequel is the first album Babyshambles has released since 2007. Members came and went except for Doherty and bass player Drew McConnell. Together with present lead guitarist Mick Whitnall they sign for most songs.

The mood of the album is at times mellow. A country tainted 'Fall from grace' is an almost traditional kind of song with sweet guitars doing Johnny Cash notes and honeydripped oo-oo-oo harmonies in the background. There is also 'Farmers daughter'. This ballad has an epic chorus. Perhaps the best Doherty has ever come up with on record. There's nothing in the verse that announces what is coming up next. It's just a sort of average ballad, with the same solo notes as The White Stripes' 'I just don't know what to do with myself' cover version in the intro. And then it happens, at 1.44, the sky opens, sun pours through. The next 20 seconds are pure heaven. The touch of brilliance hasn't left Peter Doherty. Another song I really like is 'Penguins', a song that goes from sweetness to loud rock with a great melody. A lovely brook that flows through a ravine to another flatland. Great excitement.

The difference between these two songs is what makes Sequel to the prequel an as intriguing album as it is a hard album to appreciate. Not all songs make the mark like 'Farmers daughter' does, while some do not make a mark on my list at all. Where inspiration seems missing. That makes the luxury edition a long session to listen to. At the same time many songs have a pleasant pop feel. E.g. 'Maybeline' is certainly on the good side of the fence and 'Fireman' has this pleasant punky edge. The title song has a jazzy feel. Looking at it from a higher vantage point, Sequel to the prequel can be seen as an album in a long British tradition. The Kinks' 'Village green preservation society', Queen's 'A night at the opera' both had all these very different flavours to its songs. Vaudeville, hard rock, ballads, country. Anything was possible and this seems the route Peter Doherty has taken and no, he doesn't come close to these two classic albums, but then that's impossible, isn't it? They are too high up for too long. What can take them down? Probably nothing, a new generation listening to new albums.

If I look at it this way, my conclusion on Sequel to the prequel somewhat changes. Then I hear an artist who came back after a long time, daring to step into any direction he feels like. Referencing his first heroes, The Clash, in punky rock and reggae, (and The Velvet Underground with a cover of 'After hours' as bonus track) but also the music his grandparents' generation enjoyed. Renewing himself and extending his playing beyond what he became famous for. Sequel to the prequel is an album that caught me a bit of guard, having filed Peter Doherty away as has been. I was proven wrong, so welcome back, Peter. Long may you play.

You can listen to 'Nothing comes to nothing' here.
Gepost door Wo. op 10:42