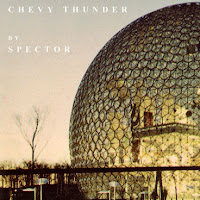 You can listen to Chevy thunder, live at Later with Jules here.

Today all the attention goes out to just one song: Spector's Chevy thunder. Just because we can and because I just love this song. It has everything a good pop single needs to have on board to stick out of the hundreds of songs that are presented to the world every week.

As such Chevy thunder is a great example of where Dutch pop bands are in 2012. Spector fits the bill of Go Back to the Zoo, Handsome Poets, Kensington. All are able to truly propel a song forward with great pace, enthusiasm and a melody that invites singing, excuse me, shouting along with. Heavy guitars, loads of keyboard sounds just under the slightly flawed voiced singer. Mind, Spector comes from London in the UK and fits in between the mentioned bands just nicely.

Lyrically the song is as it should be with a title like Chevy thunder: Springsteen. Maybe not as serious, but there is some desperation and escapism hidden in the lyrics about 'killing my self tonight' and 'just to see how far this car goes'.

The song has those elements when used wrongly make it a terrible song, if used right everybody in an audience will go "whoa-whoa-whoa-o. Kaiser Chiefs galore, although no band takes it as far over the top as KC. The voice is harsher, towards Editors, but not taking the mood down too far. Chevy thunder is meant to be fun and it is. With all the best from the sixties to the tens, yes even the eighties, put in to 3 minute something, like a good pop song should.

For one reason or another I have the feeling that Spector is going to be a one-song band, but its up to the band to prove me wrong. If so, the only thing I can say: what a song it is! A song to devote a blog post to. I will not play it in a car though. This only leads to speeding tickets galore.