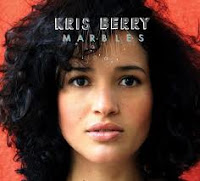 At one day in time we had Chuck, we had Richard, Jan, Dave and now Kris. There was a lot to do about this singer in the Dutch press some weeks ago. The popular as well as the "serious" press. So, I thought, WoNoBloG may just need to form an opinion on Marbles. I prepared myself for basically anything. Two years back I listened to Caro Emerald's first album and wasn't overly thrilled. Her hit singles were unavoidable for over one year on radio and tv. Kris Berry is compared to Emerald a lot, so let's go and have a listen.

After my first, quick listen, my impression was: that was it. No need to delve further. However, my girlfriend is a fan of Caro, so I decided to play Marbles for her during a late Sunday breakfast. In that setting it appeared that I liked the album better than she did. There's a lot to explore on Marbles. From jazzy outings, towards bluesy songs and guitar playing or true songs like 'Always or never'. A beautifully performed song with intricate guitar playing, that would also shine on an album of much better known singer-songwriters. What we also find on the album are Caribbean influences and a ska kind of song, 'Stick to the recipe', which she probably brought along from her homeland, the Dutch Antilles.

Berry is not someone who came young and fast to this career. Born in 1982, she only released her first EP in 2011. This brought her direct attention from the radio and tv as well as support slots for a few international acts performing in The Netherlands. Together with her side kick Paul Willemsen she made Marbles that was released in 2012. Berry's native tongue is English and who listens closely will recognise this in her singing.

Berry dares to rely on her voice. Several songs are almost bare. 'Crazy days' is her voice, an acoustic guitar and a hand played, slightly muffled and distorted piece of percussion. She sings the song in a way that it stays interesting. I think this is one of the main differences with Caro Emerald. Her songs, the ones I know, are all pumped up, where Berry's are low key, softer in tone but still explore the edges of a song. Like in 'Going nowhere' in the dryly played lead guitar lines and the meandering percussion.

Marbles is not an album that I will be in the mood for any time of the day, but is an album I will come back to at the right moments. Like at this moment. Late at night, a bit tired, but not ready to go to bed. a clear guitar, a faint trumpet, soft percussion, maybe some violins. Most of all, Kris Berry's voice. It appears that this a-typical record for this old rocker turns out to be a must listen. There's always an odd one out.

Would you like to contribute to WoNo Magazine's blog yourself? You can. Write us a (concert) review or story based on something music and your spot is ensured.

You can order Marbles hier