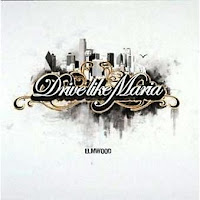 Listen to 'I'm on a train' here

Another album that sort of crept up on me over the past weeks. At first I had the idea that it was a bit too much QOTSA and related bands, but not unpleasant to listen to. Now I'm quite convinced that Elmwood is a good album in its own right. Despite the fact that this is an "old" album, from 2009 and the band has a new album out this year, WoNoBlog puts Elmwood in the limelight.

Drive Like Maria is a Dutch-Belgian band that is active since 2005. The four piece know how to rock out as well as chug it out. Their first single 'I'm on a train' is a great example of how the band manages to play like QOTSA and have their own accents in the music, by putting an acoustic guitar in the mix and a great seventies like lead guitar sound. A mandolin is also not exactly a snare instrument one expects when listening to a (stoner) rock album. Nevertheless 'Talk to me' starts with a mandolin, before Dave Grohl like dry sounding powerhits flagellate the drums. Drummer (and singer) Bjorn Awouters only barely doesn't kill off his drum kit.

John Congleton produced Elmwood. One of the other bands he's produced is Black Mountain. Everybody who gave their album 'Wilderness heart' a listen, won't be surprised that there is a mainly acoustic Led Zeppelin-like song on this ablum. What is a surprise though, is Janis Ian singing with Bjorn Awouters. Folk/pop singer Ian has a carreer now spanning circa 35 years and is not exactly associated with power pop/stoner rock that Drive Like Maria excels in. The combination works and gives the album a little extra. Ian features on two quieter songs where her voice blends in perfectly. The contrast with other songs is quite high, like the full out rocker (with absurdist lyrics) 'Fist full of bananas'. And then listen to that song's chorus. Great riffing, great singing, great melody and to top it all off, great soloing by Nitzan Hoffman.

It's because of this mix of songs that Elmwood grew on me. I only heard the album circa a month ago for the first time and started liking it more and more, because of the variety, where at first only the QOTSA stuff stuck out. The slow bluesy 'Die a little more' is a gem in which Janis Ian features again. She doesn't have a young voice any more, but fits this song. She may never before have sung on a song as hard as this one. Drive Like Maria knows how dynamics can make a song stick out. 'Die a little more' comes alive, dies off, comes alive, dies off. Well done!

And because I almost always forget the bass player, here a special line dedicated to Robin van Saaze. The foundation of this album is great!

The album maintains this level of dirty rock, that makes me think of driving through the desert in a flatbed with the speakers way high, and a deliciously cooled beer waiting for me at the end of the road. Elmwood doesn't have much to do with the Low Countries, but who cares when music this good is made here and produced in or near the arid country of Texas. Song by song Drive Like Maria captured me and in a convincing way. So, I also just found out that they have a new album called Drive Like Maria and that former Krezip drummer, Bram van den Berg, joined the band. This seems a somewhat unlikely combination, but who knows? Another album to check out some day soon. For now I'm happy with Elmwood.

You can order Elmwood here