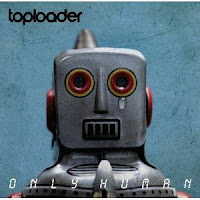 You can listen to 'A balance to all things official' here.

If someone had told me a few months back that I would be going to a Toploader show I would have looked at him or her somewhat awkwardly. For two reasons: 1. I wasn't aware that the band was back together again and 2. They were never really my favourite sort of band. Sure, I had both their albums, the fantastically title 'Onka's big moka' and the more, okay almost, down to earth titled 'Magic hotel'. Both contain (Brit)poppy songs with a slightly soulful twist, that never really stuck in my brain, with the exception of their big hit 'Dancing in the moonlight', which still can be heard on the radio frequently.

So to my surprised my girlfriend's youngest said: "For my birthday present I would like to go to Toploader". This form of birthday present has become the thing we do and to mutual agreement. What surprised me most, is that he wasn't even born when the song he knows was released, that of course being 'Dancing in the moonlight'. So there we went on Friday 22 June of 2012, but not after hearing the band live at 3FM in the morning. The eleven year old was noticed by singer/keyboardplayer Joseph Washbourn, standing totally in front of the stage greatly enjoying himself: "You weren't even born when we made this. Amazing".

Paradiso was frighteningly empty when we arrived. Wouldn't anybody come? In the end I think the 'Bovenzaal' was filled more than half. Those that decided to stay home, were proven wrong. The audience, among whom several fans of the first period, some with their kids, were treated to a short, but increasingly better show. The band is downsized to a trio these days (or this gig), but all sorts of backing tracks pumped the sound up, without becoming unconvincing. Toploader captured their audience and brought smiles to the faces of people.

The music was advertised by Paradiso as indierock. Of course we can argue what this is, but Toploader's music may have some inklings of rock, but I hear more Stevie Wonder than Johnny Marr in their music. It's strange that they missed the boat somewhere down the (at least in a significant part) piano driven music of the megabands of the zeroes, Coldplay, Robbie Williams, Keane, Muse, Snow Patrol, The Killers, etc. Several of their songs can compete easily, but perhaps a very little extra is missing. That magical element that makes a song stick in the brain automatically, this little thing 'Dancing in the moonlight' has, but is a cover song. There could have been a spot for them in there, but the band disappeared in 2003. Who knows what could have happened for them?

Joseph Washbourn is a good singer. His voice is extremely pleasant to listen to. There was some great harmonising as well, but sometimes there was this little extra who, who's and ahh, ahhs in the background amiss. As a trio the band is down to basics and this clearly lays a constraint on Washbourn's aspirations as a front man. There were some lead vocalist's moves, but the keyboard is an instrument that keeps someone tied to his seat. The trio played good, tight and put enough swing into their presentation to make people move. They played a lot of songs from their new album, 'Only human', "because of the future". Quite rightly so, but I have my doubts if I'm honest. The music needs one extra element -and I'm not saying the "Coldplay" element, as that band has lost their magic about 8 years ago. It's the world that didn't notice the change- bit that little something that makes their songs stand out in the crowd. If I knew what that is, I might just not have been writing here.

Over all: A fun show, where I never would have been without an eleven year old. You can read his review very soon. And yes, would have missed something worthwhile.

You can order 'Only human' here