That's Why God Made the Radio -Beach Boys 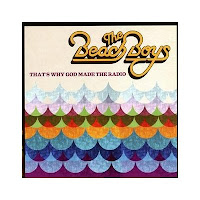 You can listen to 'That's why God made the radio' here.

With That's Why God Made the Radio starting at #3 in the Billboard charts, the Beach Boys have beaten the Beatles, with having produced top ten albums over a time span of 49 years, which is two more years than the Beatles. Only Frank Sinatra beats them with 3 more years. Lennon, Harrison and Sinatra, are of course dead, which does kind of hamper their production. None the less this is an achievement they totally deserve, with having produced yet another awesome album.

That's Why God Made the Radio could have been produced in 1969, on general it is jolly, while keeping the balance by Wilson's more nostalgic songs. It contains some beautiful chords progressions and the vocal melodies are, as always, sublime. Maybe there is no song on it with the level of perfection of Good Vibrations, but then again, how many albums do have songs of that level?

The album did receive quite some negative critiques in the international magazines. For instance the Belgian magazine Humo thinks the album is hardly worth listening to. According to Humo, the Beach Boys simply use all the ingredients from their old hits, instead of producing something new and revolutionary. They use the lead single That's Why God Made the Radio as an example, since it contains the words: “Radio,” “God,” “Dashboard,” and “Cruising.”

This mostly shows how Humo is better at giving presents with their magazine, than saying something useful about music. Apparently nobody told them that it is a reunion album, precisely made to remember people about the old days, to create the same atmosphere as 30 or 40 years ago. Would we want to listen to a Beach Boys album which does not contain the word “beach” anywhere? No! Of course not, that is why the song Beaches in Mind is on the album. People precisely want to recognize the Beach Boys they know, they want to be remembered of their past.

There are several moments on the album where the Beach Boys specifically refer to moments that passed long ago. As Rolling Stone notes the song Pacific Coast Highway is a reference to Dennis Wilson's Pacific Ocean Blue, and in the song Beaches in Mind from the second verse on they sing: “love, love, love” on the background, as a clear tribute to the Beatles. And of course the Beach Boys still use at least 3 vocal lines at the same time. They even admit themselves that they are still the same as 30 years ago, in the song Spring Vacation, when they sing: “Spring Vacation, Good Vibrations, Summer Weather, We're Back Together, Easy Money, Ain't Life Funny?”

All in all this album contains everything you can expect from a Beach Boys reunion album: some spectacular melodies, brilliant references to their past, funny lyrics, some nostalgia about their past, but most of all a very good album, with some real summer in it. The whole album simply yells sunny beaches, cocktails, and late night open fires on the beach with friends.

You can order That's why God made the radio here