Rock of ages. The movie 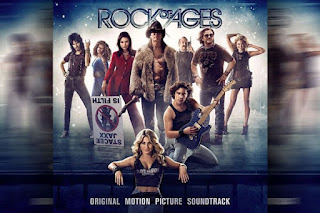 Tom Cruise as the decadent 80-ties hair band, drug and booze fuelled rock singer Stacy Jaxx? Sure ....... and I had great fun. Reminiscing over all these hard rock songs that, for the most part, I never truly liked, but hit that familiar snare somewhere deep down. (The most horrible songs can do that, as you'll have experienced too and I mean real horrible songs.) The story line is 100% familiar, the setting somewhat different, the hair not even that unlike 'Grease', come to think of it. From the moment 'Paradise city' kicked into the score, the makers of this movie had me. For some reason or other I always forget how incredibly good and sheer exciting this Guns 'N' Roses song is.

Rock of ages apparently is a musical that was filmed. I know nothing of musicals, hardly ever seen one and I did not even know I was going to a filmed musical. Set in Los Angeles in 1987, when hair bands and spandex are the thing. The Bourbon room is the venue where it all happens, but is under threat from the IRS, mismanagement and the Mothers for God fighting the filth of rock music and the influence of rock on their kids with banners on the streets. All is done with great irony, Michael Jackson like dancing by 40+ ladies kicking out their legs, pure sex, singing about banning the rock monster on Sunset strip forever. Alec Baldwin and Russell Brand singing their love for each other ending in a long kiss. And Tom Cruise having the time of his life and singing. Mary J. Blige as owner of the 'Venus Club', Paul Giamatti as the slick manager Paul Gill. There are many familiar faces in Rock of ages, topping it off with Catherine Zeta-Jones as the vengeance fuelled, spurned "Mother of Prevention". But who would have thought that redemption lies just on the other side of a portion of some good old fashioned hard rock as a lascivious hardrocker finds undercooled vulcano reporter about to erupt? One thing is seriously askew though: Tom Cruise can show his Mission Impossible IV rock hard trained body off all the time, but where did the lewd Stacy Jaxx get it from? Hoisting JD bottles up by the crate? Carrying white powder sacks by the 60 kilos worth?

In the meantime boy meets girl, loses girl, finds girl again and sing together forever and happily ever in the background of a hard rock celebration. One of the highlights is the way 'We built this city' ("on rock and roll") is fused with "We're not gonna take". Utterly brilliant! This trick is performed several times when original musical score songs are fused effortlessly with e.g. 'More than words' or 'I love rock and roll'. While Cruise's staple song of this movie, Def Leppard's 'Pour a little sugar on me' is just great to watch. 1970 Roger Daltrey is very near in this one.

When 'Paradise city' kicked in during the title role, I realised that I had a totally great time with this movie. Where the first bus scene made me burst out laughing loud and not from enjoyment. With no more than circa 15 other people of which three left at the first song. I was already looking at these 60-ish ladies, "are you sure you want to see this"? "Sorry, wrong movie", they said apologetically. I will never be a fan of 80-ties rock, but here I couldn't have asked for more this Friday night in Leiden.

A snippet of 'Pour some sugar on me' and the trailer can be found here.