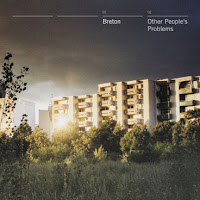 You can listen to 'Edward the Confessor' here.

A fairly cool cover graces Breton's début album. Like a giant blast captured by a photographer, but most likely a very bright light against a darkening night sky, reflected in the windows of the apartment buildings, lighted up in the flare.

Other people's problems was received quite well in the media, so I thought to give it a spin. Listening into the second song all alarm bells were ringing at full force: 80ties, 80ties, 80ties! And unfortunately not the 80ties influence that came back to us in naughties in the form of bands like Franz Ferdinand, Dogs Die in Hot Cars and ultimately Arctic Monkeys. No, this is Depeche Mode, Medium Medium, Howard Jones, Nick Kershaw, Visage and all these pretty horrendous 80ties acts that nearly turned me off of following pop music's development at all. As you have noticed that did not happen, hence I'm listening to Breton.

Devoid of much emotion, the clicks and clocks of modern rhythms lace mostly electronic sounds and distorted sounds. '2 years' has the rudiments of a song hidden in the melody of the singing, carefully riding the loops and samplelike sounds. 'Wood and plastic' comes closer to my liking, some good guitar lines in the song. A violin is the closest to warmness Breton has to offer.

To be honest, after the fourth song, I usually turn the album off. At present I'm forcing myself to listen and it doesn't become much better. The bleeps that follow just don't entice me. Despite the fact that there's an effort at a modern who-how sing-a-long part, there is no joy in it. Maybe a little more than in Joy Division, but not a lot. It's not as if I'm going to whoa-hoo also. Far from it. Boo-hoo is more appropriate.

In the mid 80ties we had a Robert Smith style shoegaze community. "Bats" we called them. Always huddling together in a corner of the disco floor, waiting for that one song. Usually 'A forest' or 'Love like blood', as if on cue they took over the dance floor, to retreat straight away to huddle and shoegaze some more. Somewhere in 1987 or early 1988 they just disappeared, gone, this underground movement.

Their kids started to make music and called themselves Breton. Slower, more electronica, but definitely to their liking. "Bats" of 1986, here's an album to check out. For kids in 2012, sorry I can't advice you on this one, but it's seems like Other people's problems is a little bit of everything and nothing. For all those who like me abhorred 95% of what happened musically in the 80ties: RUN! There are a few sparks in here, but it just doesn't shine through in more than a few songs and when 'Jostle' comes it's simply to late and only listenable by comparison. A no go zone this Breton, though that may just be my problem.

You order Other people's problems here