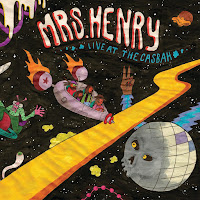 "Please Mrs. Henry, Mrs. Henry Please". Every true Bob Dylan fan recognises this line from the song on 'The Basement Tapes" album. Then there is the band Mrs. Henry releasing a mini album with songs played live at a venue called the Casbah in San Diego. That was on 24 January 2019 and on the 24th this year, the mini album was released.

Listening to the five songs, it must have been quite the earringing experience. Mrs. Henry did not hold back for a second and wasn't afraid to let a song flow off the rails completely. The first single 'All I Can Do' flies off in all directions, with the band members having trouble to keep song, band, vocal chords and perhaps even the venue itself together. They seem to let the song fall apart totally, multiple times. No matter how tight the band is, some of the time, in the breaks it allows, everything to fall apart, only to come back together. Each time they give it their all again and it shows in the result. In the instrumental ending, the best of classic southern rockers comes together. A piano motive, a beautiful guitar solo and an ever stronger and convincing backing. Like in the days of old the song goes on and on, without me wanting it stop. Only the three guitar line up of Lynard Skynard and The Outlaws is missing. For the Dutch readers. We have DeWolff. And for The Casbah folks, that is a band to book some day!

A song like "Peace' proves Mrs. Henry can be down to earth as well. It rocks out without going off the rails. The alternation between the piano and organ is quite nice. The guitar solo is soaring. In fact the song shows what a great live outfit Mrs. Henry is. All band members know what they are doing, creating a supertight, extremely nice rocking song, with Peace being tossed away almost like the band doesn't want it, has no need for it, but, hey, here it is and if you have a place for it, you keep it. In a rock song like this there is no peace found nor a need for it. Once outside of the Casbah, now that is a different matter, a topic we won't continue on here.

Next up is the ballad 'Lovin' You Baby'. It is nice and delicate, but to be honest here, sing it to your girlfriend next time, as this is not what I would want to hear from a band like Mrs. Henry. Sorry to be so direct, as I can hear the emotion, but the song does not hold up in the contrast of what is going on around it. Where the other ballad, 'The River' does cut it. A nice slide part adding soul and flavour and again great singing. This is also the only song where I notice a small reference to Dylan & The Band before 'The River' explodes into southern rock hemispheres.

Just listen to 'Where Are We Going' and everyone knows what I mean where that first ballad is concerned. This song rocks and then some more. I don't know if Mrs. henry is from San Diego (answer now: yes) but I am reminded of Dirty Sweet from that city, a band I saw twice in the 00s with that great, great song 'Delilah', a song with a pop feel to it, the only element I miss on this record. For the rest, Mrs. Henry emulates the best of U.S. rock from years ago and gives it its own twist and a tremendous amount of energy to boot.

A live show from this band must be a joy to be present at and count me in should Mrs. Henry ever cross the pond. What an energy.

You can buy Live At The Casbah here: