A Scalp For The Tribe. Wallace Vanborn 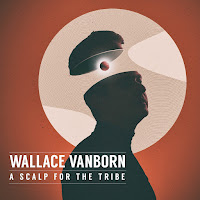 A scalp was one of the things that scared me most reading Karl May's 'Winnetoe' series as an adolencent. To be more exact, the act of scalping, the thought of it. Fact is, I may never have heard of scalps had it not been for the German writing cowboy and indian stories around the turn of the 19th to 20th century.

So a scalp for the tribe does not scare me anymore. Wallace Vanborn returns to this blog with its new album from November last year. The Belgium band rocks out in its characteristic melodic way. In its music it finds the right balance between hard rocking instruments and songs. There's always a melody to be found making A Scalp For The Tribe an attractive album to listen to.

Being a trio the music of Wallace Vanborn is elementary. Interlocuting drums and bass and the guitar that fills the spaces the rhythm sections leaves it, is the basis of this band's music. Over it the voice(s) is (are) laid. No doubt there is an overdub here and there. The instruments are made larger than live as they need to be in rock trio setting. It still is extremely nice to hear how the drums except being tight, can explore little side alleys, where the bass locks into the basis of the rhythm of the drums, making the explorations possible without losing the pace of the song.

The lead guitar can please or go for little prickly bursts, that go a bit against the grain. Songs are made less pleasing and must be worked at harder to like. Like you can hear in 'Mastering Ascension'. The rhythm is somewhat halted yet remains easy to move to, just by going with the flow. 'Mastering Ascension' is a sign that Wallace Vanborn is willing to take the less easy road, while still delivering a very nice song. All rock bands can rock in a straight forward way, not all can please with songs that play out in a less easy way.

It turns out that it was five years ago this month I went to see the band play in Leiden and that I had not even reviewed an album, which surprises me, I have to say. I remember liking the support act a lot as well. If anything happened in between it has passed me by. With this new album the band certainly put itself back on my radar. It took me a while before I had time to catch up with it. Late last year was just too hectic, now that I have listened to the album I can only comment: A Scalp For The Tribe? "Shout it from the mountain", to quote a line from 'Even A Broken Guru Is Right Twice A Day'. Are they?, but who am I to argue. It is one of those fine melodic rock songs on this album.