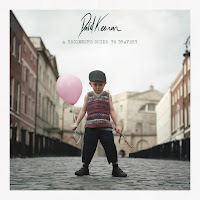 David Keenan is a storyteller, allowing his listeners to picture some of his lyrics straight away. Whether the story itself is easy to understand or not is inconsequential. The imagery is often powerful, like David Keenan himself is. 'James Dean' opens A beginner's Guide To Bravery and it is easy to see him working for Irish Rail and see him in the situations created by Keenan. Older, slightly bent, but alive and well.

'James Dean' is the kind of song that gives a glimpse of the David Keenan playing in the pubs of Ireland. Rough voiced to get over the din, making grand gestures in voice, playing and presence. It is also the David Keenan that is left behind on most of the album, when the choice is made to play his music in a band setting. The result is as stunning as it can be too much of a good thing.

David Keenan is from Dundalk in Ireland and left as a teenager for Liverpool where he developed his playing and singing skills busking on the streets. Returning to Ireland he managed to attract attention of other singer-songwriters who took him along on their respective trails. In the summer of 2019 it was time to record his songs with producer Gavin Glass.

With the sentence "The war is nearly done, are you ready for the healing" 'The Healing' ties in nicely with yesterday's posr of Low Hill's new single 'Heal'. The two songs could not be further apart, musically and emotionally. Keenan always goes for hugeness in his voice and expression. Glass' producer's role must have been one of someone running behind someone trying to catch up and match the power already on offer. With a few exceptions David Keenan never restrains himself and is all over his listeners. Almost shouting them towards the place where he himself wants to go to or has already ended up in. Big, bigger, biggest. And when he holds back somewhat, like in 'Origin Of The World', the background is full of frightening sounds from a distorted electric guitar and synth. The soothing strings try their best to make up the menacing musical threats. Without a chance and at best a hard fought tie.

It is a song like 'Origin Of The World' that allows some air into my relationship with A Beginner's Guide To Bravery. No matter how impressed I am at times by David Keenan's expressiveness, it is impossible to always do so. Like I already wrote, at times this record is too much of a good thing, as his presence consuming. It's now or never it seems. There's no escaping the singer nor his music, except by not playing A Beginner's Guide To Bravery.

On this album David Keenan gives himself, fully completely and the band around him even whips him up some more. So there is more than 100% to enjoy. This is a singer who bares his whole, soul, feelings, thoughts and more. The result is an impressive album that easily beats all the singer-songwriter albums from Ireland and beyond I have written about in the past few years. At times this may be too much of a good thing, it is the real thing. Extremely realm stunning and good.

You can listen to and buy A Beginner's Guide To Bravery here: