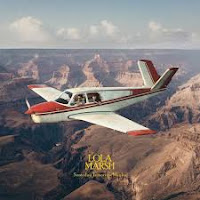 Lola Marsh is a duo from Israel. Although there is almost no artist from the promised land that I am familiar with, exception Asaf Avidan's 'One Day (Reckoning Song)', it is absolutely clear that a lot of the music I like a lot and like less has all found its way to Israel. There are a million influences in Lola Marsh's music that shine through and make the album such a joy to listen to.

Before you get me wrong, the fun starts with the songs of Lola Marsh. The fact that a band sounds like something or somebody is not a guarantee for good music. On Someday Tomorrow Maybe, a title as infinite as 'Definitely, Maybe', decades of music with a touch of class and style come by in the form that I have come to like with the ascension of Lana del Rey. Singer Yael Shoshana Cohen moves vocally between Del Rey and Stevie Nicks. Slightly nasal and a cool aloofness is her trademark as well. The music she makes with Gil Landau moves between a dark pop, even reminding me of some of George Harrison's solo work of the 1970s, and more modern pop that comes by me here and there, mostly in public spaces. Interchangeable and not much fun. But then that music is not made for me, at least in intent, but for the youngsters of today. This influence disappears totally in the second half of the album. Someday Tomorrow Maybe may have these influences, in part, but is different. This album is, also, made for me.

Lola Marsh comes from Tel Aviv, one of the huge cities in Israel and if I have to believe adds, the place to be there. The duo started in 2014 and released an EP called 'You're Mine in 2014, followed by 'Remember Roses', in 2017, its first full length album. The first two releases have not reached me, but I'm certainly happy this one has. Lola Marsh in some songs reaches for that kind of retro sound Donna Blue has as its signature sound, without going so deep into the past. At the same time the voice of Cohen can go off into Kovacs' regions as well. Most of all however it is the sort of timeless chic Lana del Rey goes after. Let's say Nancy Sinatra in the 60s beside Lee Hazlewood. It is acoustic, folky songs like 'What Am I' and 'Four Long Seasons' preventing the album from becoming a clone and listening how small and beautiful 'What Am I' plays itself out with the bass and keyboard, it is easy to just melt. That bass sound is straight out of Air's 'Moon Safari' and Charlotte Gainsbourg's 'Rest'.

On the basis of all the above Someday Tomorrow Maybe should become huge in this country. Next to the fact it holds quality songs of itself, there is so much to hear what this country likes in the last 20 odd years, it should become noted. It is early in the year, but I have found my first, tentative favourite album for the long list.